The Case of Batton Lash and MSNBC 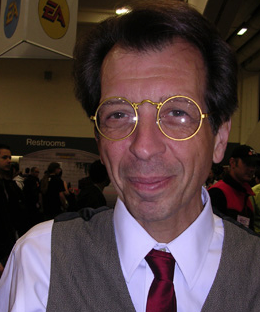 A brief soapbox moment if I may.
You may have seen Lawrence O'Donnell on MSNBC on Tuesday evening as he made a mountain out of the proverbial molehill regarding a political cartoon by Batton Lash (seen in the photo at right) and James Hudnall. O'Donnell spent long minutes earnestly telling his viewers what a vile and evil, RACIST cartoon this was...and then refused to actually show it (or even put it on MSNBC's website) so that people could make up their mind for themselves. It gets worse.
I disagree fundamentally with Mr. Lash on his politics and more than likely with Mr. Hudnall, also. But I know Batton Lash. I interviewed him for the book WELL! a few years back and we have maintained an online friendship ever since. Politics aside, I have found him to be one of the nicest, most creative and most supportive comics industry professionals I have ever met and I have said this over and over to folks. His wife, Jackie, has also been supportive.
I've known Mr. Lash's politics for some time but as I have said before, I come from an age when disagreeing with someone's politics didn't make the other person the Anti-Christ. I don't normally see his OBAMA NATION strip. That said, there is nothing--NOTHING racist in the questionable strip. It isn't particularly amusing and doesn't make much of a valid point though either. It is, at worst, a tacky little fat joke on Michelle Obama. Not only is there no law against that but I'm sure that it would have come and gone virtually unnoticed had Mr. O'Donnell not singled it out in what seemed almost a personal affront.
O'Donnell just went on and on about this two panel throwaway political jab for no obvious reason. He, like Batton, is an intelligent man. I can NOT believe for a second he was nearly as personally offended by this cartoon as he acted! If his early manipulative actions at making the cartoon seem much worse than it is were crossing a line then what he did next certainly crossed several more. Calling out Jackie by name, he urged people to tell her to get Batton to stop doing this strip. He informed viewers as to where the couple live and urged people to approach them if they saw them at Starbucks or elsewhere and express their disgust! He did the same thing for Mr. Hudnall, also drawing his family into it for no fathomable reason.
It all boils down to one thing. Freedom of speech. It's one of the few near absolutes. You're either for it or against it. I spent a lot of years at the bookstores standing up for books and authors and the rights of people to read whatever they want. It is always easy to defend the side you're on. The hard part is to defend the rights of those with whom you fundamentally disagree. In the end, though, they're the ones who prove that it's all worthwhile.
In this case, I found Batton's cartoon with Mr. Hudnall to be incredibly far from his better works as seen in various ARCHIE comics, RADIOACTIVE MAN and, of course, WOLFF AND BYRD. But they had the right to publish it.
I found Mr. O' Donnell's urging of his viewers to confront these creators and their families to be
an irresponsible usage of that same free speech--particularly in today's already ridiculously polarized environment. When "free speech" can possibly lead to harm, that's where that term "near absolute" comes in above.
Free speech is power. As Americans it is arguably our greatest power even in all of the current political turmoil. And as comics fans, if we've ever learned anything it's that "With great power comes great responsibility." Apparently Mr. O'Donnell never read SPIDER-MAN.
For Hudnall and Lash's reactions to the controversy even before MSNBC went there as well as to see the cartoon in question, you can go here:
http://biggovernment.com/hudlash/2011/02/15/our-response-to-the-cartoon-controversy/
Posted by Booksteve at 1:09 AM