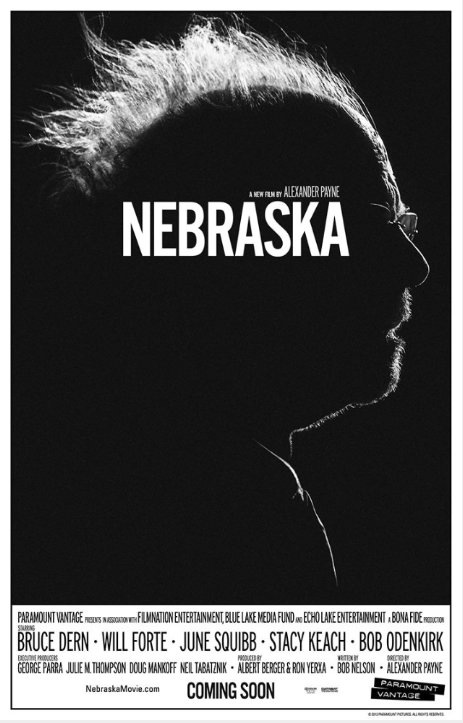 As a Bruce Dern fan from way back in his OUTER LIMITS days, I wanted to see him take home the Oscar last year for what seemed like a marvelous, career-topping comeback performance in the black and white NEBRASKA. Sadly he did not.

The film has recently turned up on NetFlix, however and I wanted to recommend it to all and sundry. It's long but never dull, slow moving but never boring, quiet but never tiring. It also offers up some impressively juicy performances by not just the amazing Dern but also Oscar-nominated June Squibb, Stacy Keach, Bob (He's everywhere these days) Odenkirk and the one that was, to me, the revelation--Will Forte.

I only knew the latter from  his silly TV comedy performances which, while enjoyable, gave no indication of the depth he could bring to a performance that offers as much silent acting as it does dialogue. VERY impressed with this man.

The real kicker, though, that makes this not just a good, well-acted film, is the astounding black and white photography. This is not just one of those "crank down the color" productions. No, every scene offers imagery that makes even the most mundane subject looks like it should be hanging in a museum!

The story, dealing with an old man's delusions that he has won a million dollar sweepstakes, is mostly a McGuffin giving the excuse for the wonderful and scenic revisiting of the past but, at the end, the filmmakers, while staying realistic about it, actually twist it around to work for the benefit of a quietly lovely conclusion.

Rent it, buy it, or catch it right now on NetFlix.
NEBRASKA.
Booksteve Recommends!

Posted by Booksteve at 2:08 PM