I'm not sure how long it had been there but I discovered Cincinnati's MUSIC MART sometime in the early seventies. It was a thin but long shop crowded with tables and tables full of alphabetized 45 RPM records, all in their trademark yellow personal sleeves. In fact, just about any song ever released on 45 it seemed! Some were originals, some remaindered with the little holes in them but most seemed to be re-issues. Every time I went across the river or even anytime either of my parents went across the river, I'd send them with a list of songs I'd heard on the radio. You didn't want to get the new stuff there because you could usually find new singles for less than 60 cents anywhere else. But all the stuff from a year or two or ten before, this was THE place to find it.

At some point, they moved from Vine Street to 6th Street, as per the revised sleeve below, and even changed their name. Obviously I went there as I have a number of records with this sleeve as well but I have no memories of the new place at all. Something tells me they weren't successful there, though. 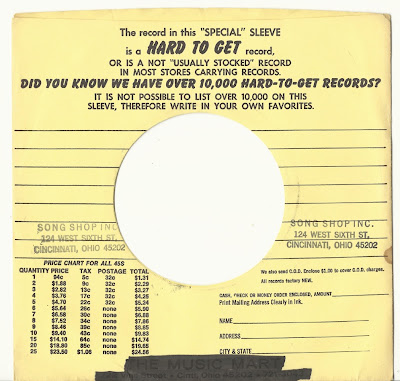