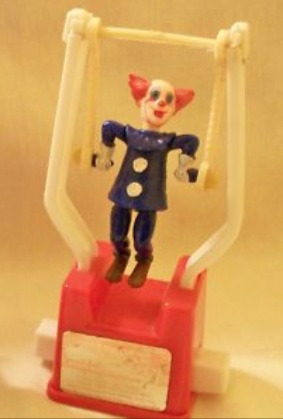 Seen here is a web photo of one of the only birthday presents I actually remember receiving through the years. Oh, I know there must have been others but this BOZO puppet toy is the earliest I recall. You see, my birthday is 2 weeks after Christmas so anyone who had been thoughtful enough to get me a Christmas present would usually say it was for my birthday, too.

BOZO was my present at my 11th birthday party in 1970. It was, I believe, the only actual birthday party I ever had as well...and I spent part of it petulantly locked in the bathroom after I threw a tantrum because everyone was winning prizes except me and it was MY birthday!

It's also memorable because my next door neighbors, Logan and Todd, brought a friend of theirs named Mike Conley, whom I didn't know. After that, I'd see Mike at school and always said hi. I'd usually see him on the winding staircase between floors. Not for long, though, as Mike had a cerebral hemorrhage in the stairwell just about a month afterwards and died. Just about the entire school turned out for his funeral on a cold, snowy day. Even the school bullies were there!
R.I.P. Mike.

Todd died at some point, too. Not sure about Logan. There were a bunch of other kids there that day but quite frankly I'm at a loss as to who they were.

That was when I turned 11, which turned out to actually be a pretty good year.

But today I turn 55. I've had some success over the years and some failures. I've won more times than I've lost and I'm still here. That's a plus.

But I must admit to feeling old beyond my years. I rarely truly enjoy anything anymore and my health issues have taken somewhat of a toll. I've given up so much in recent years.

And next week, I embark upon a project which shall have to remain hush-hush for now but it ties in with me from the 1970s, from just a few short years beyond that 11th birthday that remains memorable for all the wrong reasons.

Maybe there IS a second act.