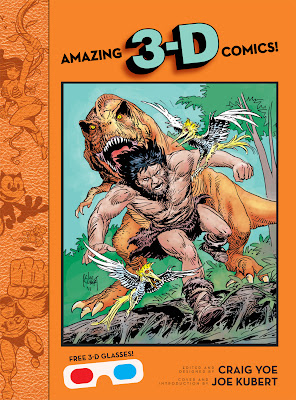 Our second volume is nothing less than the fascinating history behind the first 3-D comic books in the 1950's...and I can't even see 3-D! That's right. For years I thought it was a practical joke; that there was no such thing as 3-D but that, like the emperor's new clothes, no one wanted to admit that they couldn't see it! Then one day, just a few years ago, I DID see it! And I was amazed. It was in the introductory short film made for the 3-D re-release of THE NIGHTMARE BEFORE CHRISTMAS. I watched a candle float by me IN the theater! But...that was it. I didn't see any 3-D in the film itself, nor any in the dozen or so other films I've been forced to pay extra for over the past few years since.

But the thing is...now I know that it's REAL! It's not a joke! Craig's AMAZING 3-D COMICS! offers dozens of stories from the original 3-D craze, most of them actually in restored 3-D...complete with the requisite free glasses (albeit better quality than the original green and red cellophane lens ones). 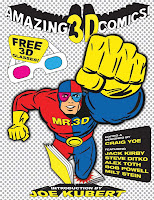 Not just a regurgitation of previously published materials, Yoe spent much time speaking with the legendary Joe Kubert who, along with his then art partner Norman Maurer (and Norman's brother) gets credit for developing the process involved and starting the craze itself while at St. John. I know Craig actually talked with him because I transcribed the interviews myself. Joe also wrote an inroduction to the book. For Maurer's side, Craig assigned me to speak with his widow, Joan, who just happens to be the daughter of Stooge, Moe Howard! As a lifelong Three Stooges fan, that was a treat!

Some may recall the originally announced cover for AMAZING 3-D COMICS! as seen in early ads. That was scrapped when Mr. Kubert became so enthused about the project that he was willing to contribute an all-new cover featuring his classic caveman, TOR, star of one of the earliest 3-D comics. Then, given all the elements, Craig Yoe designed a book cover to die for by doing Kubert's art as a lenticular panel to simulate actual 3-D! The character from the original intended cover joined Felix the Cat (star of his own previous Yoe Book) and others on the textured sidebar and a fun shot of Kubert and Yoe in actual 3-D highlights the back cover!!

Along with the expected Maurer and Kubert, the other stories and art inside are by such luminaries as Alex Toth, Bob Powell, Howard Nostrand and Jack Kirby. A lot of the stories are stand-alone horror, humor or western tales but familiar characters include The Three Stooges (Shemp version), Cowboy actor Tim Holt, Felix, Tor, Maggie and Jiggs and Sheena, Queen of the Jungle.

So no, I don't get the full effect but that's my eyes. It's not the book's fault. All of the stories are readable even without the glasses. Well...all accept a couple of trick one pagers where the goal was to cover one side of your glasses to get one side of the story and another to get the other side.

AMAZING 3-D COMICS! is not just a fun book but a detailed look at an important and often neglected piece of comic book history from one of out premier comics historians...and his talented sidekicks. Ahem...

Posted by Booksteve at 6:24 PM