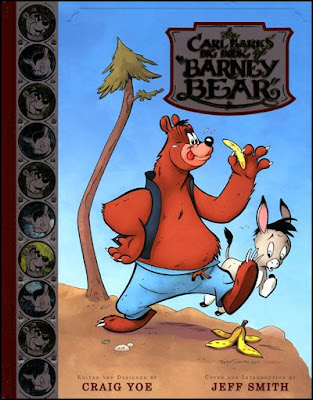 First up is THE CARL BARKS BIG BOOK OF BARNEY BEAR (a title suggested by my lovely wife, btw). I'm going to assume if you're reading this blog then you're familiar with Carl Barks. Barks was the former Disney animator who managed to humanize the spastic duck characters of the Disney theatrical cartoons in the pages of various Dell comics from the forties through sixties. His creation, Scrooge McDuck, led WALT DISNEY'S COMICS AND STORIES to be one of the biggest selling comic books of its day with nary a superhero in sight! His stories have been cited as an influence on Indiana Jones and most certainly on whole generations of international comics fans and creators who, for his entire active career, knew him as simply, "The Good Duck Artist."

And Barney Bear? Odds are you know him, too, as his fairly lethargic and repetitive MGM cartoons have been staples on television since the Dark Ages, most recently seen on Cartoon Network. Seriously, they aren't that good. A couple of them featured a character called Benny Burro, though, and that's where Barks comes in.

In the pages of OUR GANG comics, essentially a showcase for MGM properties including the title series but also TOM & JERRY, Barks took Barney and Benny and turned them into an almost Laurel and Hardy type of comedy team. With someone to talk with, Barney didn't quite seem so lethargic anymore, just loveably dim-witted!

In THE CARL BARKS BIG BOOK OF BARNEY BEAR, Craig collects all of the Barks stories of the characters. They're short but they're a lot of fun and "Unca Carl" (as he would come to be known) manages to work his magic here also, making the characters much more likable and much more sympathetic than they ever were on film.

As always, Yoe reprints every story page directly from the original comics in restored high-definition treatments (from the collection of Bud Plant) giving them a shiny, yet vintage, feel. There's a nice new cover of our stars  as well as an intro from Barks aficionado Jeff Smith (BONE) and some rare illustrations and original art to accompany Craig's learned, behind the scenes, text piece on the artist and his protagonists.

The hallmark of Yoe Books is, of course, the wonderful design work given each new publication and this particularly attractive volume is no exception. (Ignore that Amazon link cover below as that is not the actual cover.) My favorite part is the way the back cover gag (by Barks) now incorporates the book's actual barcode!


But fancy bindings don't make a book worthwhile. Barks' storytelling was what elevated him to the top of everyone's list of the great comics artists and a great storyteller can tell a great story no matter how small it may seem. The Barney and Benny stories are not the epic adventures of Scrooge McDuck...but they're still worth the telling and they make me smile. Let's put it this way. I didn't like Barney Bear from the cartoons. Never did. I like Carl Barks' Barney Bear...and I really like THE CARL BARKS BIG BOOK OF BARNEY BEAR.

Posted by Booksteve at 7:28 PM