Movies That Fell Through the Cracks # 69 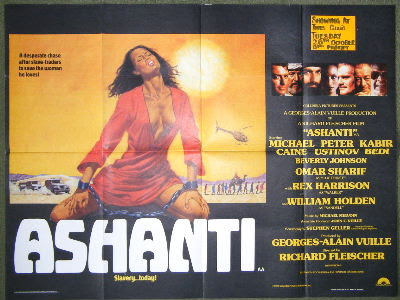 The seventies were loaded with big-budget motion pictures shot in exotic locations with major international stars...and sadly, it's kind of hard to find a good one. ASHANTI definitely isn't one.
Seventies supermodel Beverly Johnson plays a doctor who is kidnapped and her husband, played by Michael Caine, sets out across the desert to rescue her.
This had to have looked good on paper. Script is by the man who also did THE VALAVI PAPERS and PRETTY POISON, two smart, well-written dranas. Direction is by Richard Fleischer, son of Betty Boop and Popeye animator Max Fleischer and himself director of classics including Disney's 20,000 LEAGUES UNDER THE SEA, FANTASTIC VOYAGE and SOYLENT GREEN.
Along with the prolific Caine, actors include Rex Harrison, William Holden, Peter Ustinov, Kabir Bedi, Omar Sharif and Johnny Sekka. Most of them appear only briefly in the film Caine has often referred to as his worst.
Posted by Booksteve at 4:23 PM