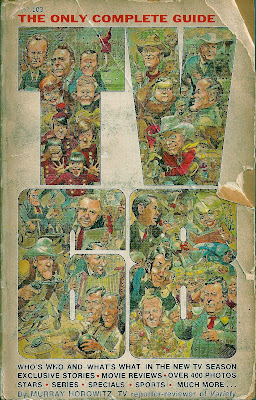 Recently acquired from Derek T, TV68 is a wonderfully nostalgic book for anyone who was into television back at the beginning of the 1967-68 season but it would mean little or nothing to anyone else. Designed as a preview of the then-upcoming Fall Season on ABC, CBS, NBC, NET (later known as PBS) and in syndication.

The marvelous and cleverly designed Jack Davis cover suffers considerably from size and reproduction qualities but some clever gags with Captain Kangaroo, the Monkees and others.

Inside, you get coverage of new shows, returning series, specials, movies scheduled for network TV airings, news, sports, kids' shows and even talk shows! All major players in all the fields get a brief bio and it's fun to read about how much hope they had for now long-forgotten series like COWBOY IN AFRICA, THE LEGEND OF CUSTER and THE JERRY LEWIS SHOW.

It's also fun to read about now classic shows such as THE CAROL BURNETT SHOW, IRONSIDE and MANNIX as they were just getting started. I noted that the once popular JUDD FOR THE DEFENSE was originally meant to be called simply JUDD.

The section on changes in returning series indicates that STAR TREK, in its second season, would have a new Russian crew member but gives no other info nor any mention of actor Walter Koenig. It goes on to say that the new season would also present a female alien regular described as "the distaff version of Mister Spock."

BATMAN, going into its third season and about to introduce Batgirl, is described as having lost all its luster when the "camp fad" quickly faded more than a year earlier. Julie Newmar was apparently signed to return as Catwoman but, as any Bat-Fan knows, ended up being replaced with the unlikely choice of Eartha Kitt...which somehow actually worked. Elsewhere in the book is a listing of the top 22 Nielsen shows from the 1966-1967 TV season. I was surprised to see BATMAN wasn't even listed!

Also not listed among the popular shows was THE MONKEES although the awards summaries indicate that that series won the Best Comedy Series and Best Director Emmy Awards for the 66-67 season.

Stars who had their own TV specials that year, all pretty much unviewable these days, included Carol Channing, Jim Nabors, Red Skelton (whose long-running regular series was still running also), Dick Van Dyke (who had left TV 2 years earlier), Richard Rodgers and Barbra Streisand. The TV special I would most like to see again is THE FABULOUS FUNNIES, described as a history of the impact comic strips have had on the American people. Hosted by Carl Reiner and produced by the folks behind the PEANUTS specials, it was expected to included participation from Hal Foster, Chester Gould, Charles Schulz, Milton Caniff and Al Capp. I very, very vaguely recall watching this!

Overall a very solid preview in its day which now makes it a very solid bit of nostalgia for the 1967-68 TV season. Thanks, Derek!
Posted by Booksteve at 9:51 PM