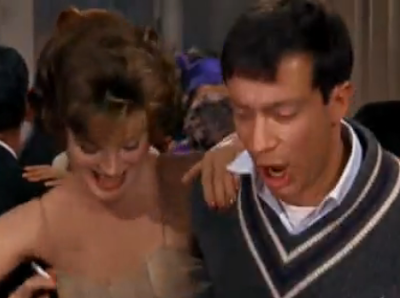 Since the late Kip King, in spite of a career that lasted more than 50 years on stage and screen in Hollywood, probably won't make the annual year-end necrologies, I thought I'd offer just one more tribute to him here. I was watching a video of ABC's 1974 Fall Previews this morning over at http://classicshowbiz.blogspot.com/ when I noticed Charlie Brill, an old friend of Kip's that I was able to connect him up with again before he fell ill. This made me think of Kip. Then, in the very next scene...there's Kip himself in the back seat of a carpool excitedly extolling the virtues of Clint Walker's then-new series, KODIAK. Two shots of that clip are below. I'm not sure he even remembered this bit as he once provided me with a list of his TV appearances (in the hopes that I could find some for him). It was much longer than what IMDB has but still didn't have this on it. Above is Kip about a decade earlier in BREAKFAST AT TIFFANY'S. I recently spotted him in a small but pivotal role in WESTWORLD, also (he's the one who says, "I think something's wrong.") Kip may have left us this year but he keeps turning up. Where will he be next? Stay tuned!