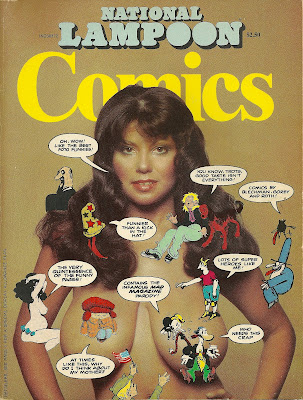 Time for another random book off the shelf here at the Library. Today's selection is 1974's NATIONAL LAMPOON COMICS. Technically marketed as a magazine at the time, this is, by anyone's definition, in reality a thick, square-bound book gathering together many of the best of the comics, Foto Funnies and other comics-related material that had been published in NatLamp until that point.
The only new material here in this seventh collection from the now-classic satire magazine of the seventies is a brief introduction shouting the virtues of Michael Gross, the comics loving Art Director who is credited with putting the mag on the map but who, at the time of publication, had just left for other pastures.
What we do have is quite a choice collection that includes some of my favorite comics pieces such as:
G. GORDON LIDDY, AGENT OF C.R.E.E.P. with a parody cover by Marvel's Sgt Fury artist Dick Ayers and art by S.H.I.E.L.D. artist Frank Springer (under a pseudonym).
THIRD WORLD THRILLS drawn by Gray Morrow.
THE ADVENTURES OF DEADMAN (not THAT one!) by Henry Beard, Dick Giordano and Neal Adams.
CRASH CHRISTIAN by Michael (early SNL's "Mr. Mike") O'Donoghue and Springer, a team noted for the early serialized adult graphic novel, THE ADVENTURES OF PHOEBE ZEIT-GEIST.
THE VENTURES OF ZIMMERMAN, a Bob Dylan parody drawn by Adams.
Add to that some color pages of CHEECH WIZARD from the late, great Vaughn Bode, whose work I first discovered in this mag. You'll find some of the great esoteric and avant-garde Jeff Jones strip, IDYL, some amazing old-style cartooning from Shary Flenniken on TROTS AND BONNIE and also Gahan Wilson, Charles Rodriguez, former Wally Wood sidekick Ralph Reese, future POPEYE artist Bobby London and the minimalist stylings of Ed Subitzky. Add to that the bountiful babes of the Foto Funnies (with appearances by Gross, Tony Hendra and others) and, perhaps best of all, NATIONAL LAMPOON's infamous (as the cover describes it) and devastating (as I describe it)parody of MAD.
I'll admit that at age 15, this cover attracted me as much as anything else but I look through the rest of it now and I am amazed at the material therein. I certainly had no clue that in the next century I would find myself Facebook friends with Michael Gross, Neal Adams, Shary Flenniken and Jeff (now Catherine) Jones. Bobby London and I have mutual friends and I have heard from Ralph Reese in relation to my Wally Wood blog. Gray Morrow, of course, is the subject of another of my blogs. I have a funny story about P.J. O'Rourke, also--listed as Executive Editor at the time. It was from a time he was the guest speaker at a Waldenbooks Managers meeting in the eighties. Never known if it was true or just gossip, however, so I'll keep quiet on that one.
Posted by Booksteve at 1:53 PM