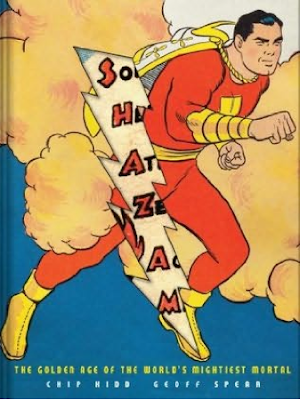 Well, Shazam! Friend Brittany Rose (see our other blog) got me this well-receieved new book by Chip Kidd and Geoff Spear for Christmas.
I can see where some might be disappointed to find it isn't a collection of stories featuring the original Captain Marvel but not me. This is exactly what I expect from Chip Kidd, all done up in his trademark design style. It's a celebration not of the classic Fawcett stories but of the world and the legend of the so-called Big Red Cheese beyond the comics themselves. The movie serial, the fan club, various premiums and toys, toys, toys! That's what this book is about. There are some original art scans and exactly one complete story--a rare one by Joe Simon and Jack Kirby of all things!
Along the way, you'll pick up bits and pieces of the history of Fawcett Comics, the Marvel Family and even some of the other Fawcett heroes such as Spy Smasher (of whom the text erroneously claims that he never teamed up with Captain Marvel beyond the occasional WHIZ COMICS cover. In point of fact, there is a famous early serial that ran several issues in both characters' story slots in which Marvel has to stop a hypnotized Spy Smasher who is actually working AGAINST America!). All in all, it's a quick read but one you'll return to over and over to revel in the long lost time when the World's Mightiest Mortal was the most popular of all superheroes!