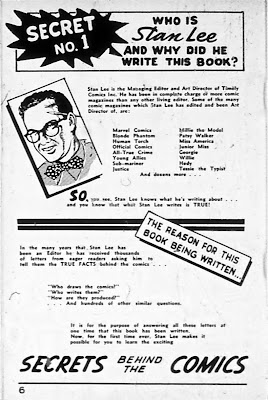 Word spreads around the blogosphere that today is once again--as it is every year--the birthday of the one and only Stan the Man Lee. Stan often gets a bad rap from the either/or fanboys who feel compelled to choose Lee or Kirby or Lee or Ditko. The thing is that Lee was working in comics for two whole decades before the Marvel Universe came along. And he has continued to be creative now for more than another three decades after his day to day involvement with comics ended. As Mark Evanier and others have pointed out today, Stan Lee's greatest creation is undoubtedly Stan Lee, the exuberant elder statesman and spokesperson for pop culture as we know it in our world today! Would that we could all have such life as we grow older!
On the day my long-deceased father joined the army in WWII, Stan Lee was already working in the comics industry. He was still there the day I was born, the day I got married, the day my own son was born and he is, today, without a doubt, more famous than anyone ever associated with comics! Earlier this year, when I called another artist on the phone, he told me that he had just let Stan Lee go so he could speak with me! I have never in my life felt so important! Thanks for everything, Mr. Lee.
Posted by Booksteve at 4:06 PM