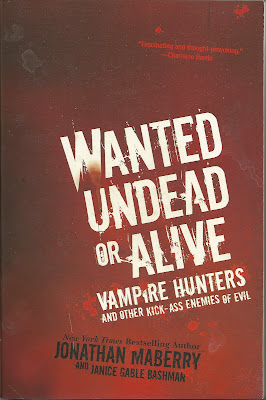 This is a tough review because WANTED UNDEAD OR ALIVE by Jonathan Maberry and Janice Gable Bashman isn't a bad book. It isn't a good book either, though. It just isn't really much of a book at all. It certainly isn't the book I was led to believe it would be.
Subtitled "Vampire Hunters and Other Kick-Ass Enemies of Evil," WANTED UNDEAD OR ALIVE, from its cover to its advance press, proclaims itself to be a survey of real and fictional hunters of supernatural evil through the years. There is some of that in there but there's a lot more also that happens to be only peripherally related. There's a fairly straightforward philosophical history of good and evil (with funny footnotes), a long section detailing the names and crimes of real world serial killers, a color illustration section consisting mostly of fantasy paintings and a scattershot look at pop culture good guys and bad guys from the Shadow and Doc Savage to Buffy, Angel and Hellboy. There's sections on Chinese spirits and Taoist exorcisms, cosplay, mythology, Celtic legends, FBI profiling and TV-style ghost hunting. In other words, this book tries too hard.
What's there is good, all written in a light, breezy style in mostly short sections, almost like one of the popular bathroom trivia books. The authors seem learned in all of their subjects and one does put the book down feeling as though it has been informative if not educational. It's just that reading it in one sitting made me feel like I had just read about 25 smaller books, many of which didn't really interest me to the point where I would have read them on their own.
Co-author Jonathan Maberry, btw, is a horror and comics author of some note who happens to have a busy but most enjoyable blog that you can find here: http://jonathanmaberry.com/
Ms. Bashman's site can be found here: http://janicegablebashman.com/

Posted by Booksteve at 4:05 PM