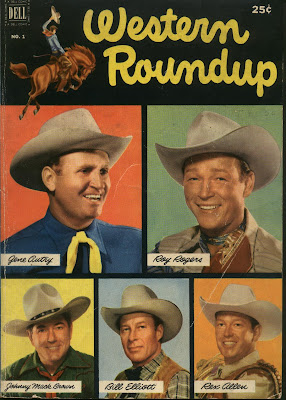 My dad loved westerns and was always talking about them. I got to see the tail end of the TV western boom of the fifties with ZORRO, MAVERICK and SUGARFOOT and was able to keep watching Roy Rogers reruns on Saturday afternoons well into the sixties. Along the way, I enjoyed CIMMARON STRIP, THE HIGH CHAPPERAL and GUNSMOKE (when it wasn’t taking itself too seriously). I grew up watching John Wayne, Randolph Scott and James Stewart movies on Sunday afternoons and we’d still head to the theater at least once a year for a new movie with Duke!

Finally, in the mid-seventies, a local TV station bought a movie package that introduced me to many of these Saturday matinee heroes of the past! Tim Holt and Buck Jones became my all-time favorites quickly but the station also ran George O’Brien and Tom Keene. Later on, due to popular demand, they picked up the Rough Riders series and the Three Mesquiteers…even some of John Wayne’s musical westerns as “Singin’ Sandy!” Seriously!

Maybe B westerns are an acquired taste in this world today. After all, if you’ve seen any four, you’ve probably seen them all. Only the personalities carry the films—the stalwart heroes, the comic relief sidekicks and all the great character actors (like Tris Coffin and Clayton Moore—yes, THAT Clayton Moore) who played the bad guys. Oh, and there were girls, too…but never mind them, there were HORSES! Not JUST horses, mind you but WONDER horses! Every cowboy hero somehow had the best horse EVER!

If you have never yet sampled B westerns, I envy you. Go into it with an open mind and they are a LOT of fun...even the C Westerns! If you’re an old-style cowboy buff, you can find a whole range (pun intended) you can order from us at very inexpensive prices including some RARE Roy Rogers and silent westerns! A portion of every sale goes to support this blog.