Flip and Curly Meet the Vampire 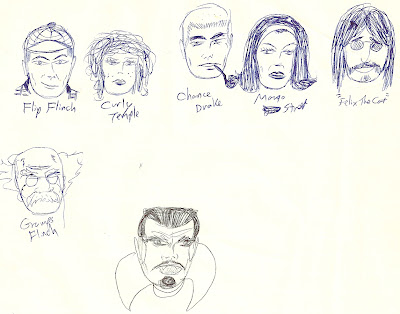 Here we have yet another of of my unrealized projects. Dating from the 1980's, this would have been a radio series that parodied classic radio and other adventure plots. The focus would have been on 1940's teenagers Flip Flinch and Curly Temple, both of the "Golly gee whiz!" type, who were constantly getting into trouble in their small town with spies, monsters, aliens, etc. Chance Drake was their next door neighbor and adult mentor, a classic archetype but somewhat clueless when it came to what was really going on around town. Margo Street was his faithful companion. Flip and Curly, meanwhile, lived with their eccentric grandfather, Gramps, a scientist who claimed he had invented a time machine. No one believed him, of course, but around that same time, an odd young man with long hair, bright clothes and an anachronistically groovy style of speech moved in to the spare room in the Flinch attic. He described himself as a "cool cat" and his name was Felix so Flip starts calling him "Felix the Cat."Meanwhile, in the old abandoned castle at the edge of town...strange doings were afoot.
With my interest in old-time radio at an early peak, I suppose it was a natural to try to interest local stations in a new series but no one was. In spite of Stan Freberg's famous commercial demonstrating the amazing things one can do on radio that can't be done on television, the local stations--even the ones playing OTR--were just completely uninterested. To be fair, when WVXU once did its own OTR style program, it took them a month or more to write, cast and produce it and then it was extremely slow and badly acted. In the old days, there were scores writers, producers and actors turning out better product weekly or sometimes (as in the case of, say, THE ADVENTURES OF SUPERMAN, five days a week!
So somewhere, I have an introductory partial script for FLIP & CURLY and I'll always have a fondness for the idea...but this is about as far as it will ever get.
Posted by Booksteve at 2:33 PM