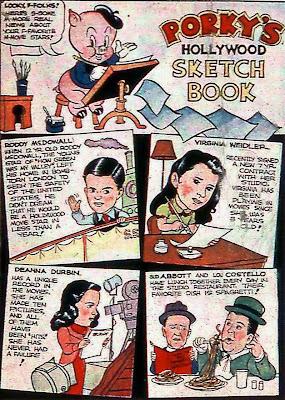 From the final 1941 issue of LOONEY TUNES/MERRIE MELODIES, here's a 2 page look at real-life popular Hollywood stars of the day. Whatever happened to these stars? Let's find out:
RODDY MCDOWALL-Roddy remained a popular child star, stepped away from films for awhile to learn his craft, co-starred in Broadway's CAMELOT opposite Richard Burton and Julie Andrews, found his career-defining role in the PLANET OF THE APES films and continued playing youthful guest roles on television well into his forties. In later years he did a lot of voice work including multiple turns as Batman villain, the Mad Hatter and a brief but memorable role in A BUG'S LIFE, his final film. He became all Hollywood's "best friend" and took some of the biggest secrets of the biggest stars with him to his grave when he died in 1998.
VIRGINIA WIEDLER--A welcome face in lots of thirties films, Virginia had already passed her arguably peak appearance in 1940's PHILADELPHIA STORY when this was published. She soon afterwards fell victim to the awkward teenage years and retired from show business to marry and have children. She put her past behind her completely but died at a still-young age in 1968 from a longtime heart ailment.
DEANNA DURBIN--I have two friends named "Deanna" and they owe their name to Edna Mae Durbin's mispronunciation of "Diana" when she was choosing a new name as an MGM starlet in the mid-1930's. As Deanna, she became wildly successful in films with her operatic voice but made perhaps an even bigger splash on radio with Eddie Cantor. She was never comfortable with show business, however, and walked away from it entirely in 1947. She married in 1950 and has not been in the public eye since. IMDB has her living in France at this point, hopefully happily ever after.
ABBOTT AND COSTELLO--Bud and Lou were just getting started in films when this piece appeared but their series of blockbuster comedy films of the war years would be Universal Studios' saving grace of the forties. Their collaboration lasted through a successful series of films, a long-running radio series and a couple of popular TV runs before the group broke up in 1957. Costello's solo career looked promising but he died suddenly after only one more film. Abbott, revered as the greatest straight man of them all, lived until the early 1970's but spent most of that time in retirement dealing with massive tax problems from his more successful era. 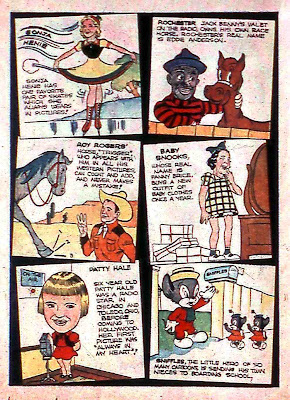 SONJA HENIE--One of the great skating stars of all time (with multiple Olympic championships), she only made a handful of movies but at her peak was one of the highest paid women in Hollywood. She became a bit controversial during WWII for her passive support of Hitler due to her family being still in occupied Norway but by the fifties she had survived that and revived her skating career with international success. Reportedly a vain, temperamental woman, she died at age 57 in 1969 on a flight to her native Norway.
EDDIE ANDERSON--"Rochester"s thoroughbred, referenced here, was named (most politically incorrectly) Burnt Cork and would go on to run in the Kentucky Derby of 1943. Anderson, himself, would continue his long and successful association with Jack Benny through the remaining 15 years of Jack's long-running radio series and into the subsequent TV series that would survive the passing of radio and last until the mid sixties. Along the way, Eddie would occasionally appear solo as in his memorable role as a taxi driver in IT'S A MAD, MAD, MAD, MAD WORLD and ended his career as the cartoon voice of Harlem Globetrotter Bobby Jo Mason for Hanna Barbera in the seventies. In 2001 he was posthumously inducted into the Radio Hall of Fame.
ROY ROGERS--Within a year of this piece, Leonard Slye would legally change his name to Roy Rogers. He had smartly retained merchandising rights to his image at a time when few people cared about such things and soon he made a fortune on just licensing fees. When his wife died in childbirth in the mid-forties, he met and married Dale Evans when she co-starred in one of his many films. The couple would both become quite religious and would live a long and happy life together. Roy's popularity grew with the advent of television. He abandoned films for the new medium and his merchandising deal netted him more success than ever well into the sixties. Roy famously had his wonder horse Trigger stuffed and mounted and put on display after he passed. Roy Rogers continued to appear both in secular and religious programs throughout his life and his squeaky clean image (as opposed to that of rival singing cowboy Gene Autry) make him still a hero to many boomers today!
FANNY BRICE--Ms. Brice had already had a legendary stage and recording career when Baby Snooks rocketed her to mass stardom on radio. For the rest of her life she played the annoying little girl to the delight of all. She died in 1951 but her legend was revived in the following decade when FUNNY GIRL, a musical based on the ups and downs of her life and career, wowed Broadway and led to the mega-success of Barbra Streisand. The subsequent film and its later sequel FUNNY LADY kept Brice's name before the public for more than two decades after her death, eventually elevating her to a true legend.
PATTY HALE--"Patty" was actually Diana Hale and at the time of this publication was just starting her brief film career. Its high points would be the two Flicka films in which she worked with Roddy McDowall (who gave her a ring she continued to wear for decades). She married and drifted away from performing, returning in commercials in the seventies and then working in advertising. Eventually, she started turning up in some of the autograph shows of the past decade.
SNIFFLES--The annoying to many cartoon mouse creation of Chuck Jones lasted longer in the comic books with his much-lauded MARY JANE AND SNIFFLES series. He was later revived and revised in a way on TINY TOONS as "Li'l Sneezer." The original Sniffles has cameoed more recently in various WB cartoon series and the latterday DC comics featuring the classic Warner brothers characters.
Posted by Booksteve at 5:36 PM