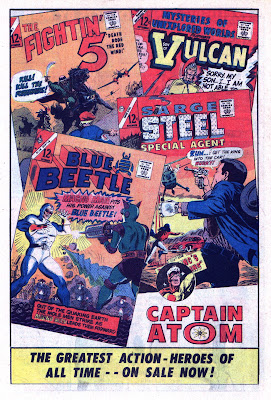 They weren't that good. They really weren't and yet there's most definitely something about Charlton Comics that can bring out nostalgia in even the strongest person. The 1965 issue of BLUE BEETLE seen in this ad, for instance, was probably one of the worst comic books of its period if not of all time. Dull writing and art, colorless (in spite of the title), almost generic Marvel rip-off characters... and yet...it was also my first exposure to BB and I've enjoyed him in most of his prior and later incarnations ever since.
Posted by Booksteve at 7:07 AM