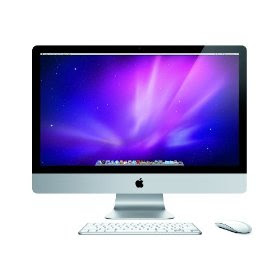 For those interested in such things, thanks to our government's tax changes, I was able to do my part to stimulate the economy by purchasing a new IMac in the wake of my recent catastrophic PC issues. It wasn't really my intention, though. No, when our tax refund showed up last week, I simply wanted to buy my wife something she had long wanted for Valentine's Day. While we were at Best Buy, however, my wife and I bonded with a young man named Chris whose understanding, humor and intelligence went a long way toward redeeming the company in my mind after the dreadful (and still unresolved. More on that some time later.) performance of the company's associated "G@@K Sq&&D."
After expressing genuine sympathy for my PC issues, he showed me a Mac with a 21 inch screen. My PC had a 24 inch screen already, though, and I didn't want to go backwards. Then he showed me a 27 inch one and I immediately felt infatuation. After we wandered around awhile, I tracked him down with a few questions and next thing you know...
It was such a popular device that none were available anywhere in town until this week's shipment. Maybe I shouldn't, I thought. But then my ever-understanding wife said two words--"why" and "not"...in that order and with a question mark after them.
I picked it up yesterday just two hours before a dental appointment to finally take care of my long-standing tooth issue. It took ten minutes to get out of the box and about one minute to hook up! There's only one cord! I've got at least a dozen cords to and from my dormant PC, some of which don't even go anywhere! Within five minutes I was set up to go online and had even installed Word for Mac!
After the dentist appointment, the rest of the evening was spent with Vicodin-fueled explorations and learning how to do things and how NOT to do things on the Mac. It's impressive and gorgeous but it's going to take me some time to get up to speed with the changes. Some things are so much easier and others seem much more complicated. The Mac versions of some of my favorite applications are dull by comparison and a few had to be replaced by colorless knock-offs. This particular machine is a dual boot machine and can also run Windows. On the one hand, that seems to defeat the purpose of getting a Mac but after awhile I may actually add Windows7 for those things I miss most.
Keeping in mind that at some point I should have the PC fixed also, I have set up a dual desk office with side by side computers. This could be fun once I get used to it all! Stay tuned!
http://www.amazon.com/Apple-iMac-MB952LL-27-Inch-Desktop/dp/B002C74GPO
Posted by Booksteve at 12:38 PM