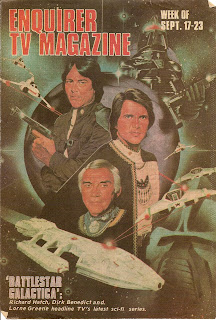 Returning to the well of local TV magazine covers of the seventies, here's a nice (and I'm pretty sure rare) vintage BATTLESTAR GALACTICA cover. This looks like a real promo piece and not just something done up for this cover by a staff artist at the CINCINNATI ENQUIRER but I could be wrong. I have to say that while I watched BG regularly at the time (and even saw the advance theatrical release at the Village Theater in Erlanger, Kentucky!) I was never much of a fan. Oh, the Cylons were cool, of course and the John Dykstra SPFX were exiting in that still barely Post-STAR WARS world but the writing just seemed...well..juvenile! I much preferred GALACTICA 1980, the later low-budget spin-off featuring Lorne Greene's Adama in a very fake beard. It was just...well... less pretentious. All that said, I hear the more recent version's pretty adult and quite well done. Tried to get it from the Public Library once but no luck so...maybe someday.
Posted by Booksteve at 7:30 PM