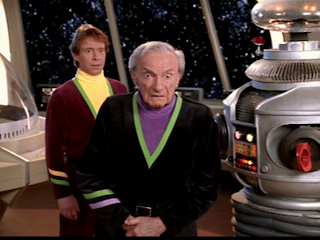 Many STAR TREK fans put down LOST IN SPACE but in reality, the two are apples and oranges. STAR TREK, for all of its lapses into foolishness, was a serious program whereas LOST IN SPACE, in spite of its occasionally hitting some semblance of reality, was a parody. Both shows had really cool spacecraft, good special effects and great music (LOST IN SPACE from John Williams!). Certainly, after the character of Dr. Smith began to be played as a conniving bumbler instead of the initial season's inept assassin, all pretense of 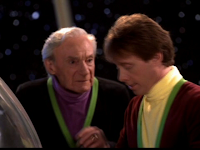 seriousness left. Like BATMAN, it became an ultra-colorful pop treat that would long be fretted over by latter-day apologists but which, taken on its own, was just as tasty as STAR TREK ever got.
Here at the Library, we have a copy of the 1998 TV special, LOST IN SPACE FOREVER, a light documentary history of the series designed to plug the then-new big screen adaptation (which was just okay). Hosted by John Laroquette and featuring interviews with all surviving cast members the highlight of the show was the last scene in which a now adult Will Robinson (Bill Mumy) and the aged Dr. Smith (Jonathan Harris) spar with the robot yet again as they learn that they will now be LOST IN SPACE...FOREVER!
Posted by Booksteve at 12:01 PM