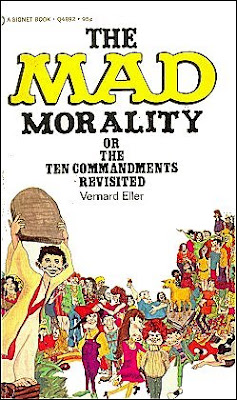 Hey, it’s time for another random book off the shelf here at the Library. Well, actually today’s book is from Signet, not Random (lol! Book humor!). Following in the tradition of THE GOSPEL ACCORDING TO PEANUTS, THE MAD MORALITY--OR THE TEN COMMANDMENTS REVISITED came out in 1970 and makes a valiant effort at finding Christian values (in spite of the obvious Jewish background) in late sixties issues of MAD. Given permission by Gaines and Feldstein to use examples to prove his contentions, the author provides literally scores of significant reprints by the Usual Gang of Idiots. In fact, if not for the official MAD foreword denying it, one would have to say he proves his case very well indeed! Similar to the recent spate of philosophy books based around the Beatles, THE SIMPSONS, BUFFY THE VAMPIRE SLAYER and Monty Python (as well as the brand new STAR TREK AND PHILOSOPHY-THE WRATH OF KANT), the pop theological trend of that period was short-lived but may well have changed some folks’ thinking when it came to MAD. MAD was most kids’ first look at anarchism and questioning authority. Many parents (mine included) thought it was subversive (it was!) and should not be permitted in the home. In fact, until I was in my mid-teens, my copies stayed under the pillow of the big chair in my bedroom along with my illicit copies of STAG. To have a theologian like author Vernard Eller point out the positive side of all of this was significant and probably accounted for the book’s multiple printings. Originally a hardcover, the Library’s copy is a later mass market printing (with a buck fifty price) but we borrowed a scan of a 95 cent copy from the net as ours has been defaced with a pasted on $2.00 garage sale sticker! Ugh!
Posted by Booksteve at 10:07 PM