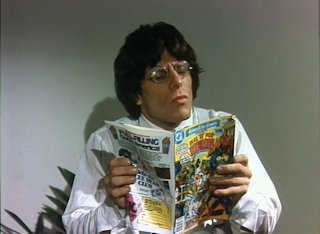 Actually, this isn't a panel at all, of course, but a still from an ambitious 1982 XXX film entitled BLONDE GODDESS. Designed to appeal to the geek crowd, this is a fun picture that satirizes comic book and movie cliches by showing us the heroic Mitty-esque fantasies of a shy comic book writer (played by one "David Messa" imitating Christopher Reeve's Clark Kent). In his daydreams, he becomes the "Marble Comics" heroes, Louisiana Smith, Jack Hammer, Flying Ace and more. There's a black and white noiresque sequence, some incredibly cheap animation and some TV quality (of the period) sci-fi effects. There's even some fairly well-done biplane sequences and my recent acquaintance, Ron Jeremy, as the evil Baron! Oh, and don't forget, there's a bunch of nekkid people having sex! What more could a fanboy want? I was struck, however, by the fact that the one actual comic book shown is a KID'S COMIC!!!--DC's DIAL H FOR HERO revival in ADVENTURE COMICS!
Posted by Booksteve at 8:08 PM