The Best of L'il Abner 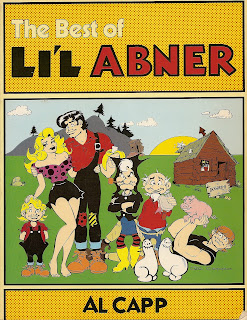 Here we have THE BEST OF L'IL ABNER from 1978. This is, in fact, the very volume for which I exchanged my ticket for the second, cancelled Gene Roddenberry show we wrote about yesterday. As a child, I had always enjoyed the artwork in the daily comic strip (we never got the Sundays) but didn't "get" the written humor. Having rediscovered and appreciated POGO a year or so earlier by picking up one of the paperback collections, I had hoped to do it again with Al Capp's classic. Little did I realize that the title was a misnomer. These strips were not really a "best of" collection at all, more of a sampler. Oh, there were a few strips from the fifties but much of the material was from Capp's more controversial (and decidedly right slanted) sixties and seventies period. I did appreciate the humor more, even when I didn't agree with it. Still, it would take Denis Kitchen (to whom I once sold a L'IL ABNER metal sign!) to come along and do it up right some years in the future with a couple of series of sequential reprints (and a single volume or two). THAT'Swhen I rediscovered my respect for L'IL ABNER!
Posted by Booksteve at 9:31 PM