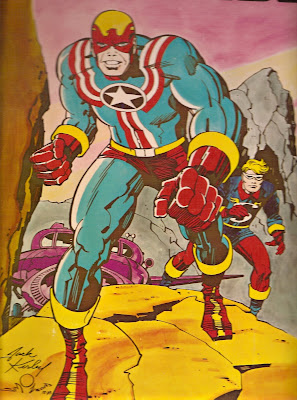 I would be remiss if I didn't recognize (as many blogs have today) the posthumous 91st birthday of the late, great Jack "King" Kirby. Kirby was the artist of the earliest superhero comics I remember reading (X-MEN), the co-creator of my all-time favorite character (CAP!) and the soul behind the greatest single run in comics history-FANTASTIC FOUR! It was also he who fostered my interest in Golden Age comics (Harvey's 1966 FIGHTING AMERICAN) and who brought me back to comics --after the briefest of defections at age twelve--with FOREVER PEOPLE. Only got to see him in person once and the story of how I almost knocked Will Eisner into him while staring at Gil Kane and noting how much he looked like a Gil Kane drawing has been told elsewhere on this blog. Today's birthday image is FIGHTING AMERICAN (and Speedboy!)in a latter-day pose by Jack with Walt Simonson from JACK KIRBY MASTERWORKS, a thin 1979 tabloid size volume with wonderful Kirby illustrations and a bit of annotation from Mark Evanier.
Posted by Booksteve at 8:00 PM