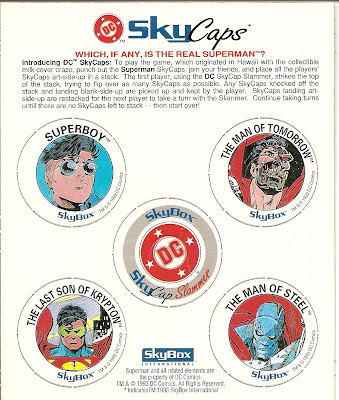 Okay, let's get real, people. Skycaps? These are Pogs! POGS!! Was there ever a fad that was so universally hated by anyone with taste and intelligence...even a small amount of it? I found these remnants of that (thankfully) short-lived craze in the bottom of a comic box here at the Library. They are the only Pog-related items I ever had. My memory, as has been noted, is not as reliable on anything that's happened after 1990 but I believe these were given away with one of the post-DEATH OF SUPERMAN issues just prior to all of these ersatz Men of Steel showing up in the comics themselves.
Posted by Booksteve at 8:02 AM