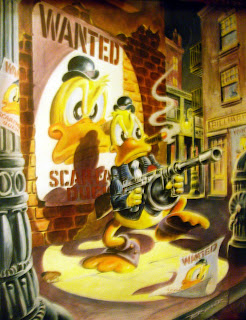 Aww, MAN! I turn my back on the blogosphere for a week or so and I come back to find one of my all-time favorite writers (whose own blog I had only recently discovered!) has died. I had planned on writing Steve Gerber a fawning email but just never got around to it. Suddenly, all the memories come flooding back.
Steve Gerber was the very first comic book creator that I ever met. Along with "Pesky" Marty Pasko and Gerber’s own writing partner, Mary Skrenes, it was at a comic book convention in Cincinnati that was held right around the time that HOWARD THE DUCK # 1 hit the stands and OMEGA THE UNKNOWN was eagerly anticipated. When I say "hit the stands," many of you might recall that HOWARD THE DUCK # 1 was actually hard to find in those days of few comic shops as it became one of the first titles collectors hoarded. I had actually gotten mine at a local comics shop a week or so earlier which is good as there was nary a copy to be had at the Con.
The guests were in a small room at the downtown hotel and in my recollection much of the discussion of the day was regarding a new comics creators union that was either being proposed or a done deal at the time. Most of the rest seemed related to just how radical the concept of Gerber and Skrenes’ brand new character, Omega, was in the Marvel Universe.
Further back, I recall sitting on the floor at my friend Terry’s house reading Gerber’s early MAN-THING stories and coming to the realization that his mind didn’t work like the minds of other comics writers! THE KID’S NIGHT OUT in GIANT-SIZE MAN-THING # 4 has been widely praised in the wake of Gerber’s passing and I must add that it had a significant impact on my teenage self as well. It was also probably the first time that I could honestly think of comic book as real literature—and GOOD literature at that!
Steve’s work on THE DEFENDERS, a book that incongruously attempted to team DOCTOR STRANGE, THE HULK and THE SUB-MARINER month after month, transformed it from standard super-hero fare to surrealist genius. For example, there was the bizarre running "gag" of a little elf who would show up at random for months and months and just kill characters!
HOWARD THE DUCK became Gerber’s alter ego, his philosophical voice and later, in endless creator disputes with Marvel, his curse. The character’s era of success was short-lived and he became all but a joke after George Lucas’ multi-million dollar flop feature film (which really isn’t THAT bad! Some great lines!) but it is still Gerber’s legacy and, like MAN-THING and DEFENDERS, has been preserved in Marvel’s current ESSENTIAL volumes.
I never met him again and I’m sad to say I never followed his later work regularly. His early works, however, made enough of an impact that I still count him as a favorite. His adult style seemed quirky and out of place in the seventies but clearly set the stage for many modern creators, perhaps particularly Grant Morrison. Steve Gerber’s legacy is a solid one and he will be missed.

Here we see Howard the Duck...sorta...in an "unofficial" poster done at the time by Gerber's collaborator on the regular title, Frank Brunner. I bought it the day I met Steve Gerber.
Posted by Booksteve at 8:54 PM