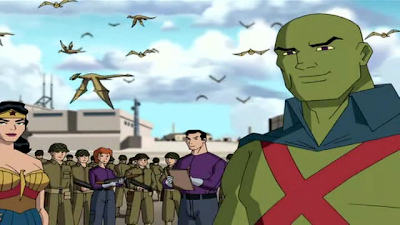 Just watched a loaner copy of the new DVD, JUSTICE LEAGUE-THE NEW FRONTIER. Based on Darwyn Cooke's acclaimed mini-series/graphic novel from a couple of years back, this animated straight-to-video movie is...well...just okay. For one thing, it is, right out of the gate, too explicitly violent. In an ultimately optimistic movie about the early days of super heroes in the DCU, I don't care how "adult" you want it to be, the violence can be implied. Same with the language. Maybe this one was for older kids and us grups but you know as well as I do that the kids who are currently enjoying the various JLA cartoons still running on cable will want to see it and most parents will automatically assume it to be kid-friendly. Eleven year old Bookdave chose to leave the room after watching Hal Jordan rather explicitly shoot some guy in the head in the opening minutes! I stuck it out myself and in spite of a few good scenes and characterizations, I have to say they tried to cram way too much (and too many characters) into just a little over an hour. Many of the scenes go on too long leaving little time for other important moments to just whiz by.
As far as the high-voltage

voice cast, Miguel Ferrer as J'onn J'onzz, Jeremy Sisto as Batman and Neil Patrick Harris as Flash come across best in their roles. ( Oddly, Ferrer once fought against David Ogden Stiers as J'onn in the unsold live-action JLA pilot of a decade or so back.) While Lucy Lawless seems ideal for Wonder Woman, in practice I'm sorry to say she brings nothing special to the role. David Boreanez is Hal Jordan (who only belatedly becomes Green Lantern) and is essentially the main character. Sadly again, anyone could have voiced him just as well. Brooke Shields, Kyra Sedgewick and Kyle Machlaclan also appear.
The Martian Manhunter is essentially the second leading character and we see his arrival, his integration into our society and culture, his imprisonment by the government and his public redemption. All of this is played with humor and pathos both in the writing and the performance.
Cameo appearances from the Blackhawks, Adam Strange, the Challengers of the Unknown and other silver age characters are nice touches but once again there's no real time for them to do anything other than just appear.
As far as the animation itself, it seems more an off-kilter variant on the Paul Dini/Bruce Timm themes rather than Cooke's highly stylized work. It also seems pretty static in spots with little of the pizzazz one might expect from a presumably bigger-budget than television film. Maybe the money all went into the stunt casting.
Cooke's original story (itself inspired by a late seventies Steve Englehart JLA story??) was given the time to pace itself as needed, a luxury that this limited animation version just doesn't have. Parts of it are just fine and nicely handled but as a whole, I'd have to say JUSTICE LEAGUE-THE NEW FRONTIER doesn't quiiiiite work for me.
Posted by Booksteve at 12:40 PM