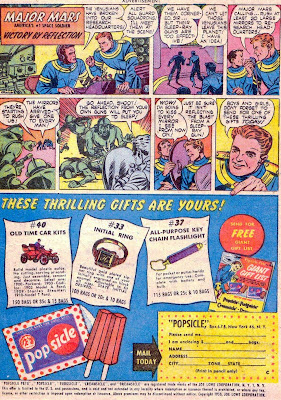 Here's a 1953 comic book ad featuring a character called MAJOR MARS. The problem comes from the fact that Major Mars doesn't advertise Mars Bars. No, that would be logical. Major Mars advertises Popsicles! Note that even the fine print gets confused when it points out that Popsicle Pete is a registered trademark. Pete, the former (and future?) Popsicle spokesperson, does not even appear in this ad! No TM for Major Mars, though. Sigh. How was a 1953 kid supposed to keep track? Not sure who the artist is but it could be Lee Elias. I seem to spot more than a bit of his style in some panels. I do know it was better drawn than some of teh actual stories in the comic itself!
Posted by Booksteve at 5:37 AM