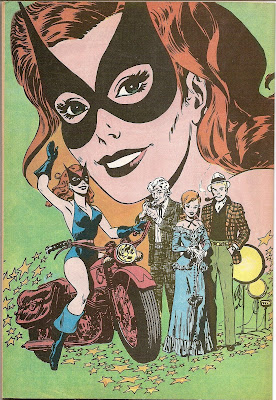 Here's an interesting piece that originally appeared on the back cover of a 1983 issue of THE COMIC READER. Featuring the pioneering Harvey Comics superheroine, THE BLACK CAT, at first glance it would seem to have been drawn by that feature's longtime artist, Lee Elias. Something about it didn't quite seem right, though, so I check inside the issue and see that it's credited to our own longtime reader/commenter Sam Kujava in the style of Elias! Hmmm... Then I start speculating on what it was done for originally and I recall that Sam attended the Kubert school around this time. Then I recall that Lee Elias was teaching at said school around the same time! Could this have benn done as an exercise for a class at the school? Only Sam can tell us! No matter what its origins, it is quite the nice pin-up!
Posted by Booksteve at 9:18 AM