The Magic Land of Mother Goose 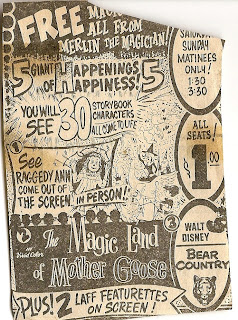 THE MAGIC LAND OF MOTHER GOOSE was the movie I saw on my second date in 1970. Well, I called it a date. We ended up having to drag my ten year old date's little sister and little brother along with us but, hey, it WAS a kiddie matinee after all. For those of you who never experienced one, a kiddie matinee was like a grindhouse for pre-pubescents. The feature was an innocuous, often foreign film thatmight or might not have it's reels projected in the right order. There were also usually cartoons (sometimes TV cartoons like GEORGE OF THE JUNGLE even!) and perhaps a short subject. On special ocassions 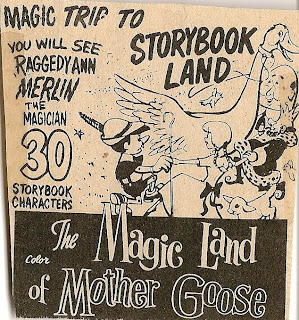 such as this one live actors would actually walk through the theater as if they had just stepped off the screen. None of this mattered however as the kiddie matinee was all about the socialization--shooting spitballs at the screen (or the girl that sat in front of you at school), crawling on the greasy floor, throwing popcorn up in the air and just generally whooping it up! That...as I said...was my second date at age eleven. (No wonder I was 23 before my third date!)
As for the movie, incredibly enough it was made in 1967 by Herschell Gordon Lewis, the legendary maverick filmmaker who brought you BLOOD FEAST, THE WIZARD OF GORE and 2000 MANIACS! According to IMDB it was essentially a badly filmed version of a badly acted stage play in which Old King Cole, Merlin the Magician and a probably out of copyright Raggedy Ann do who remembers what?Like I said...it wasn't about the movie.
UPDATE: Found this site, SANTA VISITS THE MAGIC LAND OF MOTHER GOOSE (1967, U.S.), which gives the whole story with dozens of photos!
Posted by Booksteve at 1:13 PM