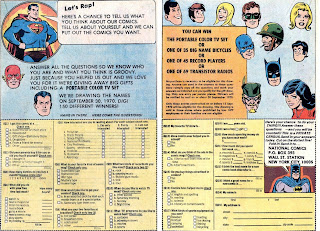 Here's a two page quiz that appeared in DC comics of 1970. Apparently, the powers that be at the new DC (or at least their marketing department) were actually trying to keep up with the times. "Let's rap," says Supes. "Do your own thing," adds the Dark Knight on page two. Most of the questions are typical of this type of thing but I like the one that asks you to list things you like to read about--national problems, black people, astrology...Ooookay, then. Note also the attempt tpo show DC's diversity by showing Jerry Lewis, Binky, etc along with Sgt. Rock and the superheroes (which, of course, include the newly-hip Green Arrow).
Unfortunately, most of their responses were probably from casual comics readers. Even the lure of great prizes like those offered couldn't get real collectors like my eleven year old self to cut up the comic and at fifteen freakin' cents I sure as heck couldn't afford to buy a duplicate! Jeez! What were they thinking?
Posted by Booksteve at 11:57 AM