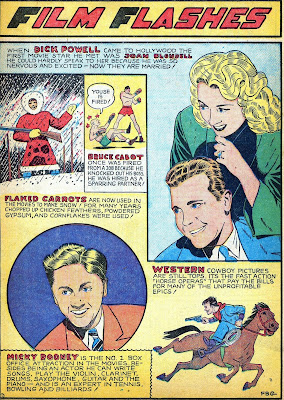 Here, from a 1941 issue of BIG SHOT COMICS is a kind of Ripley's-style page of film trivia drawn (if not written by) artist Fred Guardineer. Interesting to note considering they're pointing out his status as # 1 star that Mickey Rooney's name is misspelled! Dick Powell and sassy Joan Blondell made a cute couple in lots of early Warner Brothers pictures, both musical and non-musical. Apparently both, however, had their infidelities and the marriage did not last. Based on Bruce Cabot's reputation as a hard-drinking brawler, I'd be honestly surprised if he hadn't knocked out more than one boss over the years, both before and after this page was published!
Posted by Booksteve at 8:32 AM