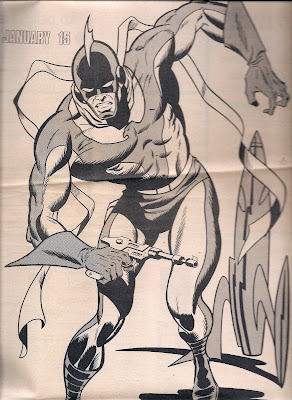 In the mid-sixties, Marvel's modestly titled FANTASY MASTERPIECES reprinted their pre-hero monster stories such as FIN FANG FOOM. Later on, golden-age hero stories were added featuring CAPTAIN AMERICA and later the HUMAN TORCH, SUB-MARINER and even some also-rans such as BLACK MARVEL and Kirby's MERCURY. Eventually, all-new stories were added such as DOCTOR DOOM's first solo outing, Herb Trimpe's PHANTOM EAGLE, THE GUARDIANS OF THE GALAXY and the Kree CAPTAIN MARVEL. Then one issue ended with a one page preview of STARHAWK! All we got was a quick character shot of a guy in a cool costume and the usual Marvel hype. Fans were excited though and thus highly disappointed the following month when the new issue presented all super hero reprints. Even worse, the reprints apparently sold better so the by now retitled MARVEL SUPER HEROES continued with those from that point, leaving us thinking we'd only imagined STARHAWK.

Eventually what there was of STARHAWK slipped out and consisted of precisely one Dan Adkins cover (which appeared on an issue of MARVELMANIA) and a handful of completed story pages (in a different issue of MARVELMANIA) and finally the picture seen here which appeared on an early seventies TBG cover. The figure here seems to be the same Dan Adkins art (looking like a John Buscema pose) but with an entirely different background. The whole story--such as it is--of STARHAWK has already been told here: Starhawk (ad character, Marvel Super-Heroes). Roy Thomas's improbable explanation was that the series was going in the wrong direction and thus it was decided to pull it until such time as it could be better thought out. Looking at some of Marvel's seventies series that DID get out marks this as unlikely to be the whole truth. The fact that when STARHAWK finally did appear (with a revived GUARDIANS OF THE GALAXY), the only thing he had in common with this guy was his name ("Take it from one who knows!") led to this version almost literally falling through the cracks. For the House of Ideas, apparently it was decided that this was a bad one. Too bad. Cool costume!
Posted by Booksteve at 6:40 PM