Movies That Fell Through the Cracks # 33 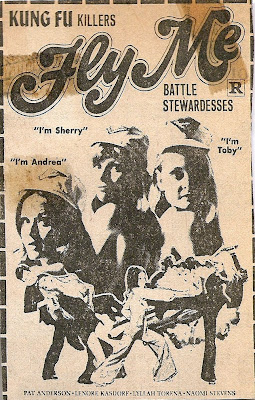 "See stewardesses battle king-fu killers!" screamed the radio ads for this 1973 low budget, hign concept sexploitation picture. It was a drive-in movie at a time when I had no source for drive-in movies so I actually did NOT see stewardesses battle kung-fu killers. Based on the fact that IMDB says virtually nothing about this film other than its credits, I'd say it looks like very few people DID see it. The actresses went on to TV character roles. The writer, one Miller Drake, apparently switched horses and became a visual effects editor, working in recent years on such blockbusters as MEN IN BLACK II, NIGHT AT THE MUSEUM and THE BOURNE ULTIMATUM. Perhaps even more interestingly, he's credited as "first mutant" in the delightfully bad HOLLYWOOD BOULEVARD. Cirio Santiago, credited as director, was a Filipino filmmaker who had worked extensively for Roger Corman and has continued to churn out low-budget action films ever since as a producer and/or director.
Posted by Booksteve at 7:12 PM