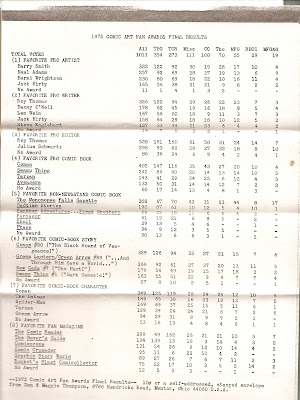 In early 1973, comics fandom pioneers Don and Maggie Thompson officiated (by mail) the Comic Art Fan Awards for the proceeding year. Once the results were tallied, they could be yours (by mail) for one thin dime OR an SASE. There's a term you don't hear too often anymore in these days of email, IMs, texts and other high-tech communication. SASE stood for "Self Addressed Stamped Envelope" and an awful lot of early fan activity was done with them.
Ever thorough about these things, the Beautiful Balloons team of Don and Maggie break down the voting as to where the most ballots originated (they were printed in various fanzines) and the birth years of the voters. They even make an admittedly unscientific effort at determining what percentage of each sex voted.
As to the winners, it's interesting to note that CONAN THE BARBARIAN swept all categories in which it was nominated. Barry Smith rode CONAN to a mjor victory over Adams, Kirby and that hot young upstart, Berni Wrightson as Favorite Pro Artist. Roy Thomas followed suit. Note that Kirby was nominated as Best Pro Writer also in spite of the fact that even then his dialogue grated on many of us. Such was the power of Kirby's Koncepts! 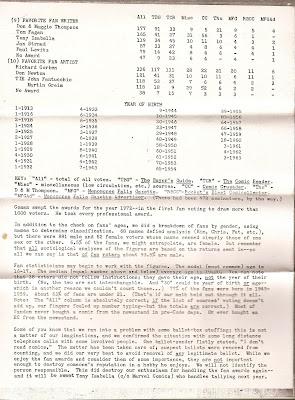 Thomas only had to beat DC's Julie Schwartz for Pro Editor. Apparently no one else was even favored enough to get nominated! I believe that was the year Stan stepped up to Publisher.
CONAN beat the spanking new SWAMP THING as best Comic Book. Also Kubert's TARZAN and a really hot AVENGERS run! I think I would've (and probably did) voted for AVENGERS.
Favorite Non-Nesstand Comic Book covered undergrounds and reprint zines. The winner, the late, lamented MENOMONEE FALLS GAZETTE was a weekly newspaper that reprinted daily and some Sunday adventure comic strips from around the world and through the years. Every issue offered a week of the likes of MODESTY BLAISE, RED RYDER, JEFF HAWKE, BATMAN, STEVE ROPER, and STEVE CANYON. It beat out Wrightson's fan collection BADTIME STORIES, the ultra-slick "pro-zine" PHASE and an odd assortment of undergrounds.
CONAN # 20 beat out the final O'Neil/Adams GL/GA as well as Kirby's seminal "The Pact" issue of NEW GODS from which so much story material has been derived since. The first SWAMP THING was also (sorry Mike Sterling) an also-ran.
THE COMIC READER, still in it's TV GUIDE phase at that time, easily beat the tabloid TBG as well as Marty Griem's traditional fanzine COMIC CRUSADER, James Van Hise's version of the venerable RBCC, Steranko's COMIXSCENE and GRAPHIC STORY WORLD, the very first fanzine I ever saw!
Favorite fan artist was Rich Corben. I don't know. I think I'd have considered him a pro by that point. Don Newton, just about to turn pro, was second. Marty Griem and John (Fandoms') Fantucchio, always a favorite of mine, tied!
Don and Maggie themselves took Favorite Fan Writer(s) with Tom Fagan--he of the Rutland Halloween parades--a close second. Prolific fan writer Jan Strnad made the list as did future DC president Paul Levitz and "Sweet Tony Isabella" whom it was announced would take over the awards the following year due to ballot-stuffing having disenchanted the Thompsons.