Badly Costumed Superhero of the Week 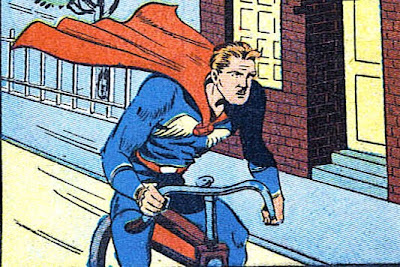 Thought I forgot, didn't you? Today's offender is THE ANGEL, the venerable MARVEL MYSTERY COMICS star who was, for all intents and purposes, a costumed rip-off of Simon Templar, THE SAINT. For much of his run, he didn't have any powers and when he did they were inconsistent. He was just a mustachioed do-gooder who tended to dress funny...and, as seen here, ride a bike. (To be fair, the bike was a one-time only deal in a chase sequence. It was also too good a panel to pass up.)
Posted by Booksteve at 7:50 PM