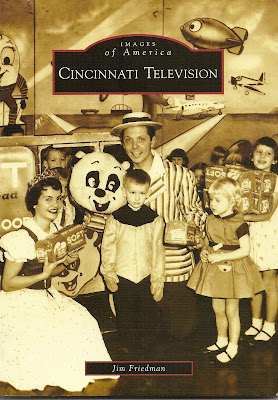 Back in the forties and fifties, when television was young, a considerable amount of it was local. In Cincinnati, perhaps more than in most major cities, it remained that way until the mid-1980’s! Now comes author Jim Friedman with a long-overdue picture-packed tribute overflowing with history, nostalgia and an endless parade of names and faces familiar to baby boomers who grew up in the mid-west.
Back in the day, local celebrities came not just from local news programs but from local game shows, local kids shows, local cooking shows, talk shows, variety shows and movie shows. While a number of Cincy celebs made it big nationally (including Rod Serling and Soupy Sales), others spread their influence from right here at home. Ruth Lyons, for example, practically invented the modern talk-show format while zany Paul Dixon is often cited as a clear influence on our Indiana neighbor David Letterman. Legendary anchorman Al Schottelkotte inspired local resident Ted Turner’s initial take on CNN and pantomimist Dotty Mack often claimed to have invented the format later popularized by MTV.

Nick Clooney and Bob Braun were 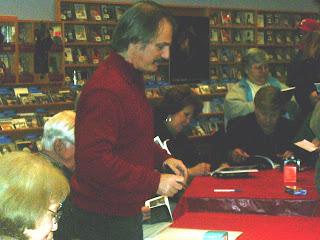 both talented singers, talk show hosts and pitchmen who started out with Ruth Lyons. The late Braun appears in a cameo as a newsman in DIE HARD 2. Braun’s son is now a respected Cincinnati anchorman. Clooney’s son has been named (as you may have heard) the sexiest man alive…twice! Many local residents—my wife included—say Nick still deserves that title himself!

Uncle Al and Captain Windy began a long-running children’s program in the early fifties and were still successful when the show finally went off the air in 1985! Within the last ten years, there were even reruns shown that were still more entertaining than most modern shows 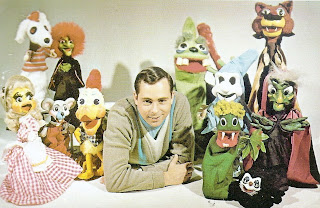 for little kids. Uncle Al’s closest rival was Skipper Ryle whose own show survived several format changes to last nearly two decades.
One of my personal favorites growing up was Larry Smith. Puppet shows used to be big on television believe it or not and Larry Smith and his puppets held court on several shows and channels from the late fifties through the mid-seventies (with a short-lived all-new revival within the past decade).
Author Friedman’s book, CINCINNATI TELEVISION, is part of the Arcadia series of regional titles and thus is limited to their standardized format of mostly captioned pictures. He has done a splendid job, however, of finding important pictures and, rather than just identifying them, giving anecdotes along the way.
This afternoon, I atten 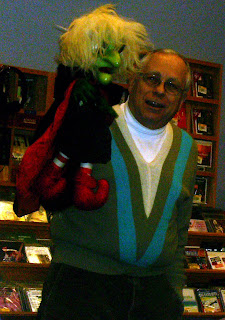 ded a signing for the book at a nearby Borders store. The book itself was sold out even prior to the signing but the event went on with folks getting flyers signed that can be inserted into the books later. Friedman had made the afternoon truly an event by inviting a number of the folks in the book to attend. Those present at the event included local singers Nancy James and Dave MaCoy (for my money the best of all the local singers), Bill Myers (who hosted SCREEN TEST, the game show on which I appeared in the early eighties), Rosemary Kelly, Walt Maher, Michael Flannery and best of all…Larry Smith and his Puppets. I had met Larry over the years as a sometime customer at my store but as is my custom with celebs when they aren’t working, I just let him shop without fawning. Today, Larry was working the crowd with his two most famous puppets, Hattie the Witch (Battie Hattie from Cincinnati) and Snarfy R. Dog. I got him to sign the back of the postcard seen above showing him with his friends in 1968.
Although the format keeps CINCINNATI TELEVISION from being the comprehensive history that’s deserved, it is a well-done, entertaining and educational book that will delight local folks and inform everyone else just how much influence Cincy television had on what we find on our cable boxes today. Jim, I hope you’re already working on Volume 2.
Posted by Booksteve at 5:49 PM