The Goodies that Got Away 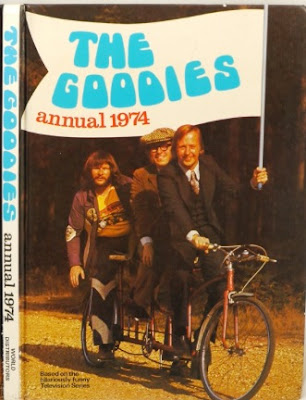 I was always intrigued by THE GOODIES, a UK series in the Python mold that never aired in the Cincinnati market. At one point, I recall reading that a man in England literally died from laughing so hard at an episode of THE GOODIES!

Back around 1990, I spotted the above British book in a local used bookstore here in Northern Kentucky with a $20 price tag. I offered the store owner $10 for it, explaining the unlikelihood of him finding anyone else around who would ever even know who The Goodies were!

Often in independent used bookstores, one could dicker over prices like that. I had been doing it since I was a teenager. But in this case, the store's owner would hear none of it. He laughed at me. I attempted to explain that the book would most likely just sit there for years untouched. He explained that he had paid $10 for it so he would only settle for $20. I explained that getting his money back would be better than having it sit there rotting for ten years.

Then one day, all the books were gone. No idea where they went. The storefront sat empty for a while and then it turned into offices. They never even bothered to take down the word "Books" on the side of the building.

I found some episodes of THE GOODIES on VHS not long afterwards and in more recent years on YouTube. Sometimes I still look back though at The Goodies that got away.

Posted by Booksteve at 9:15 AM