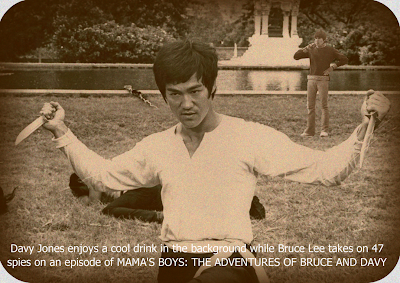 Like I said, we’ll set you up in an apartment. You’ll be seen around town together over the next week so the two of you spotted at the Stakes next weekend hopefully won’t raise any red flags.” Once again, she grabbed a napkin and wrote on it. “Here’s your new address. Just tell your families that you’ll be rehearsing for a new show.”

“And who’s paying for the cab there?” Davy inquired.

“Oh, didn’t I mention? You guys have got wheels. C’mon.” With that she rose, placed some large bills on the restaurant table and exited with Bruce and Davy. Outside, they were stunned to see what she meant.

Parked in front of the restaurant was a familiar, sleek red car. “It’s the flippin’ Monkeemobile!  What th...?!”

Bruce ran his hands over the sleekness of its body. “The Brucemobile you mean! This is awesome. My buddy McQueen would kill for this!”

“’Ey! I should know the Monkeemobile when I see it! Even if the logo HAS been painted over! How’d it get here anyway? It wasn’t parked here when we went in.”

“Secrets. They become second nature in this job, boys. Anyway, it’s not the original Monkeemobile but a tricked up copy. We want you two to be noticed and figured this would do it. But it’s got some surprises, too.”

“You mean it’s got an ejector seat so I can get rid of Judomaster, here?”

“Judo?? You ignorant Englishman! If you keep that up, I’ll show you ‘”judo’.”

“Wow. Listen to your Mama and stop fighting! You have to be a team on this. Got it?” The two stared at each other intently. “I said, ‘GOT IT?’” Davy and Bruce nodded.

Bruce held out his hand but Davy just looked at it. “Sorry, gov. Let’s build that trust thing slowly, right?”

Over the next week, Davy and Bruce made a point of being seen everywhere together—restaurants, premieres and various Hollywood functions and ceremonies. Every night they were out driving in the familiar car whose name they argued over constantly! Mama made sure that word got out to all the right gossip columnists that the pair were huddling together closely to work on ideas for a top secret film project. In a town like Hollywood, far stranger things have happened in the name of art. No one would be the least bit suspicious of seeing the two unlikely pals together around town.

Behind the scenes, however, they were being given daily briefings on their real mission. Davy was sitting awkwardly across a comfy chair in front of the television watching a rerun of GILLIGAN’S ISLAND when Bruce called out from the next room, “Have you heard anything from our contact yet?”

“I called the number half an hour ago and left a message with someone. They said he was on his way.”

“That must be him, now. You wanna get that?”

“Me? I’m working out in here,” called Bruce back from the next room, “trying to keep myself limber. You get it this time!” Davy scowled in Bruce’s direction and jumped up from his comfortable sprawl.

“Ding-DONG” went the apartment’s doorbell again. Davy padded across the plush lavender carpet and peeked out through the peephole in the door.

“Oh my gosh!” he said as he opened the door to see actor Bob Denver.

“I was just watchin’ you on telly!”

Bob looked across the room and saw himself splashing into a lagoon in fading color before it cut to a commercial. “Oh, groovy! I’ll probably get a buck or two in residuals. That thing runs so often I hardly see any money from it anymore.”

At that moment, Bruce came in toweling himself off. “You? You are our contact today?”

“Yup. Lovable ol’ me. Cass can be very persuasive and hey, it’s good money when the parts aren’t coming. Also she scored me tickets to see CSN last month!”

Davy waved the lanky Denver into the room and toward a table.  “SKIPPERRR!” echoed his voice from the past.

“Can we turn that off, please?”

“Oh, sorry.” Bruce walked over to the television in the corner to click it off.

“Cass said this would be the last briefing—the big one,” Davy noted.

“Yup.” As he sat at the marble-topped table, Bob pulled several large manila envelopes out of his bag and out of each, some large black and white photographs. “Today’s Saturday. Prince Achmendat is arriving at the airport today at Noon on a private chartered flight from Kazbistan. His prize stallion will be taken immediately to the track to be put on exhibition before Sunday’s race.”

Davy looked deeply at the racehorse in one of the pictures. Bob noticed this and looked at Davy. “A fine piece of horse flesh, huh?”

“Here’s his stats,” Bob replied, handing Davy another page. “His name, as you can see there, is Daydream Believer.”

At that moment, Davy could have been knocked over with a feather. “You mean the Prince is a Monkees fan?”

“Actually, our intelligence think it’s pure coincidence. But it sure gives a great opening for you to be able to connect with the Prince.”

“And just how,” asked Bruce, “are two ex-TV stars going to get within a hundred feet of this Prince anyway?”

“Oh, that’s all arranged, buddy. He’s having a celebrity open house this afternoon at 3 at the Hilton. While the horse goes off to the track, the Prince wants to meet Hollywood royalty. Everybody’s gonna be there—Raquel Welch, Goldie Hawn, Jill St. John, Natalie Wood, Stefanie Powers—all the big name stars.”

“’Ey, wait a minute. Those are all women. Aren’t there any men going to be there?”

“Yeah,” chimed in Bruce, “and they aren’t exactly the biggest names in Hollywood either!”

“There’ll be men there—you two. Oh, and maybe Cary Grant if his schedule permits. Remember, the Prince will be schmoozing trying to make international deals as well as good will. The fix is IN at the track to allow his horse to win if only to avoid embarrassment that could lead to an international incident.”

“But what about the assassins? That’s what you guys needed US for isn’t it?”

“Blimey, he probably doesn’t know who WE are even!”

“Here are your passes to get in. Flash these to security and you’re cleared all the way to His Royal Highness’s penthouse.”

“I was hoping we’d get to see the horse.”

“Don’t worry about the horse. He’s just something you and the Prince have in common so you can keep him talking as needed. And Bruce, you just keep an eye out for suspicious activities otherwise.”

“Who are these assassins anyway?”

“We’re not sure but we have it on good authority they’re sponsored by the Red Chinese.”

“No idea. I can’t imagine they could sneak a big group in but you never know, you know? Everything else you need to know is in these packets. Any questions?”

“Alrighty then. I’m off. Got an audition at 1 for a new syndicated sitcom with Forrest Tucker. Wish me luck! You guys should be at the hotel before 3.” With that, Bob Denver rose and scurried out the door leaving Davy and Bruce staring at each other.

Davy broke the silence with, “I’ve gotta shave.”
Posted by Booksteve at 12:30 AM