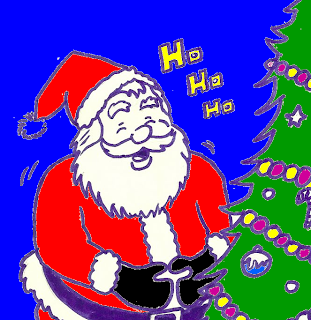 Here are some prize items leftover from our late, lamented Booksteve's Bookstore Plus site. I'd appreciate it if you'd glance through them and see if any might suit the needs of folks on your holiday list. All items are one of a kind so please email me at booksteve@aol.com before sending any payment. Items will be removed as they are sold.

Thanks and have a Merry Christmas! 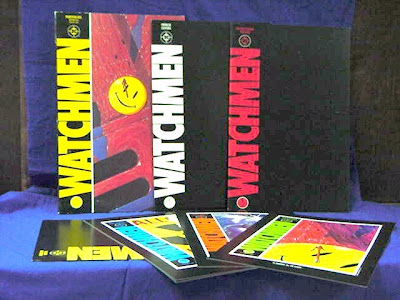 Once again we have to resort to eBay images since the item is much too big for my scanner.

Here, too, is an edited version of the description from eBay.

Watchmen Portfolio by Dave Gibbons. Published by DC Comics. 1st Printing - 1988.  This unusual set of covers includes - French Covers, Promotional Covers and American Covers. They each come in a 15 3/4" by 10 1/4" Folio and the three folios are contained a slipcase.

Folio #1 - The French Covers - The French language edition of Watchmen was printed in six, deluxe hardcover volumes, with all-new covers by Dave Gibbons and John Higgins. Folio #1 contains these covers, not previously seen in the U.S.A.

Folio #2 - The Promotional Posters - Four two-color advertisements were prepared for the original Watchmen series, and two were preprinted as promotional posters at that time. Folio #2 contains these four, plus two all-new pieces not previously seen in the U.S.A.

Folio #3 - The American Covers - The covers of the original series were unique, each being the first panel of the issue. Folio #3 reprints all twelve, enlarged for greater impact.

These vary widely when available, offered mainly at around $150.00. 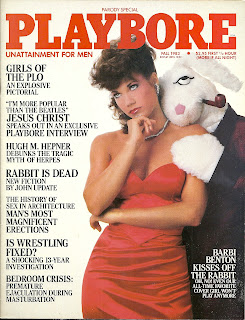 Here we have two full length parodies of PLAYBOY Magazine from nearly thirty years ago now. Wow. Time flies. There was, for a while, a trend in doing full length magazine papdies. There was one of ROLLING STONE, one of NEWSWEEK and various others. With its well-known features, famous publisher and the "Playboy Philosophy," Hef's cash cow was ripe for a lampoon...and it got two of them!

PLAYBORE was first, in the Fall of 1983, going so far as to get ex-PLAYBOY model (and Hef's personal Ex) Barbi Benton for its cover.

PLAYBOY THE PARODY followed a scant few months later with flavor of the month sex symbol Bo Derek on its cover. 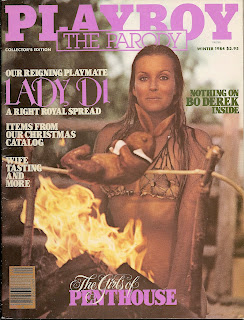 The humor in both is about on the level of a good issue of NATIONAL LAMPOON and relies largely on the audience having a familiarity with the original. As one might suspect considering the subject of the parody, there IS some nudity so this is available to ADULTS ONLY! 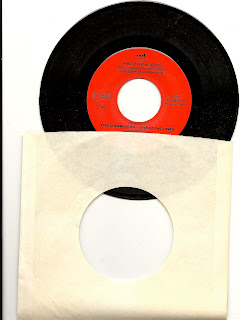 This is a rare 45 RPM record from the early eighties put out by people who had no idea how to make a 45 RPM record. This record, featuring two then-obscure (and not exactly well-known now) unreleased Beatles songs, LOVE OF THE LOVED and LIKE DREAMERS DO was available only by mail order from OUI Magazine during its PLAYBOY-lite days.

Although both songs--from the legendary Decca auditions-- spotlight Paul McCartney, the single was offered as a tie-in to a lengthy interview with ex-drummer Pete Best in the magazine as he plays on both. 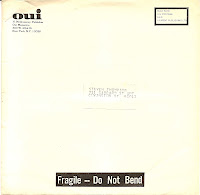 Although credited to "The Silver Beatles," this was not the name they were going under at the time these songs were recorded, having already long since lost the "Silver." Both songs appear on each side of the record exactly the same rather than the logical move of putting one song on each side.

I already had both songs on a bootleg album when I ordered this back in 1982 so I played the record once and then filed it away, complete with its original mailing envelope from OUI to my old address. 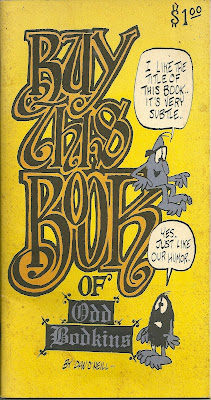 Underground comix as we know them (or DID as the distinction really doesn’t exist anymore) appeared in the late sixties and flourished through the early seventies serving as a showcase for the countercultural artistic/political/psychosexual talents of scores of young illustrators including Robert Crumb, Art Spiegelman, Justin Green, Gilbert Shelton and Bill Griffith. The thing is, though, that Dan O’Neill was there when they got there. In fact, his deceptively simplistic ODD BODKINS strip had been around since the early sixties. The collection seen here is from early 1965!

O'Neill went on to be part of the controversial Air Pirates who were taken to court by Disney. These early ODD BODKINS strips are cute with a little politics and a bit of sixties social issues but mainly just some clever humor and some highly stylized art.

This is the original 1965 edition, with pages only slightly yellowed. There's a long ago "50 cents" price peniclled in on the first page. Prices are 50-60 dollars from some sources. We're asking: 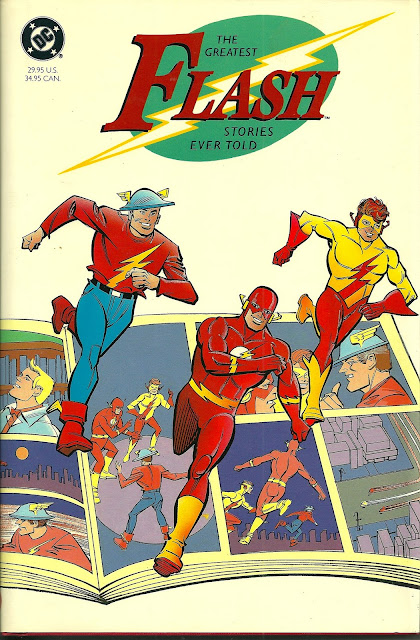 In 1991, the brief success of THE FLASH on television no doubt led to this volume of THE GREATEST FLASH STORIES EVER TOLD. In between four adventures of the Golden Age Flash and one of the Wally West Flash, we get twelve more or less classic Barry Allen tales. Mirror Master, Gorilla Grodd, Captain Boomerang and the Trickster all put in appearances from the most famous rogues gallery this side of Dick Tracy and we also meet Green Lantern, the Elongated man and Kid Flash (in his original mini-me uniform).

All the stories are choice as there were so many good ones to choose from. Carmine Infantino, the artist most associated with the character, provides a brand new wraparound cover, a new foreword and, of course, draws the lions share of the stories within. Other artists represented include Ross Andru, Butch Guice, Joe Kubert and Irv Novick.

All in all, a worthy if somehow unspectacular collection for FLASH fans. 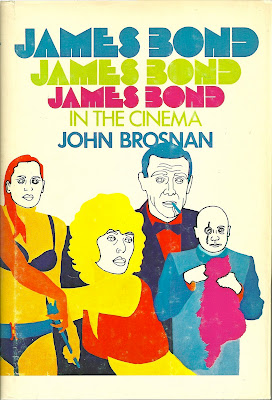 This may well be the first of the many volumes on James Bond movies that have come out over the years. This one hit in 1972 with Connery's final "Official" 007 film, DIAMONDS ARE FOREVER still fresh in everyone's minds...for better or for worse (me, I like it. Paid to see it twice!). Never saw it in stores but it was heavily advertised in the fan press. I ordered mine through the back of THE MONSTER TIMES back in the day.

Written by John (don't know if he's related to future Bond, Pierce) Brosnan, once you get past the horrid and already dated pop art caricatures on the cover it's a brisk, easy read, packing a ton of info on the movies, their making and the books on which they're based into a sparse 176 pages. There are a lot of nice behind-the scenes-photos, also, many rarely seen and not included in any of the other books that I know of.

Dust cover is in good shape with a little wear and a tiny tear at the top. Book itself is a good solid copy with crisp white pages. 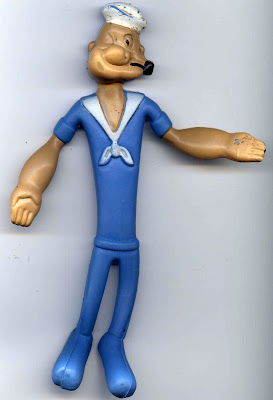 I bought this at Twin Fair in Covington, KY in the late 1960's, hardly a boom time for the old spinach-eating sailor man but there he was. I remembered him from the King cartoons I had enjoyed a s a youth so I picked it up. Soon enough the Fleischer cartoons would be syndicated on the local WXIX UHF channel so I'd get to meet him all over again in better circumstances.

Since then I've become a huge POPEYE fan and have made a point to pick up all the beautiful Fantagraphics reprints in recent years no matter how broke I was at the time. I even got to do some work on Craig Yoe's volume of comic book reprints!

Not much to say about his condition--a Gumby-like toy as seen here.