Booksteve Reviews: The Beatles Are Here! Edited by Penelope Rowlands 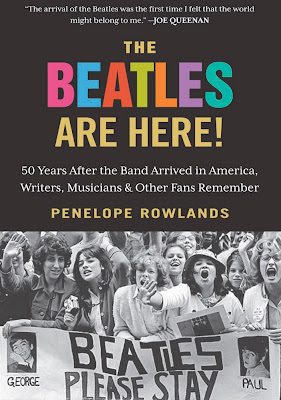 THE BEATLES ARE HERE! has the unfortunate timing of coming out around the same time as Mark Lewisohn’s latest volume on the Fabs, volume 1 of  3 thousand pagers and arguably the single most anticipated book in the history of Beatles books.

THE BEATLES ARE HERE! is a collection of brief essays on the impact of the group as we near the 50th anniversary of the beginnings of Beatlemania in America. Anytime one has a book like this, the results naturally vary from section to section depending both on the (often non-professional) writer’s skills as well as their individual memories. As expected, then, the book is a mixed bag.

The best parts to me are the fan memories, actually. Editor Penelope Rowlands has made it particularly personal by utilizing exactly ONE photo both on the cover and inside. And that photo is one featuring her (the girl in the middle) that originally appeared in THE NEW YORK TIMES accompanying an article by Gay Talese. That vintage article appears here as well, along with Talese’s more recent reminiscences of the day it was written (oddly placed much further along in the book). Perhaps even MORE interesting is the fact that one of the other girls in the photo recognized herself, apparently when Ms. Rowlands had posted it online, and contacted her with HER memories as well! She’s the one with the camera.

Celebrity fans include, among others, Billy Joel, Cyndi Lauper, Janis Ian, Will Lee, Tom Rush and Lisa See. NON-fan Fran Leibowitz contributes perhaps the most interesting piece in the whole book. Legendary rock journalist Greil Marcus is here as is Cousin Brucie, one of the DJs generally credited with popularizing the Beatles in the US in ’64.

Again, like all mosaic books of this kind, the bigger picture becomes more legible only after you look at all the individual sections of it. Mark Lewisohn’s book is a study of the Beatles themselves and their roots. THE BEATLES ARE HERE! is, to paraphrase Rowlands,  a scrapbook of the madness they would spawn.

THE BEATLES ARE HERE! is due out in early February for the ED SULLIVAN SHOW appearance 50th anniversary. If you’re a Beatles fan, there’s always room for another good Beatles book and this is definitely one!

Thanks to those who arranged my advance look at THE BEATLES ARE HERE!

Posted by Booksteve at 4:32 PM