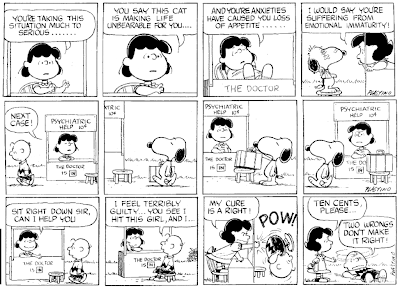 Charles Schulz always bragged quite accurately that he never used assistants and that he was the only one who had ever drawn PEANUTS or ever would. Ignoring the fact that the early comic book versions were often brilliantly drawn by others, as far as Schulz knew he was telling the truth. Seen here, though, originally printed in ALTER EGO, are a few unpublished PEANUTS strips by Superman artist Al Plastino.  It seems that at one point when Schulz was undergoing surgery, unbeknownst to him, Plastino was contracted to do up a few weeks of the strip just in case the creator's expected recovery proved problematic. It did not and Plastino's potential contributions to PEANUTS history were locked away and forgotten until he mentioned them in a couple of interviews in later years.

Posted by Booksteve at 1:30 PM