Booksteve Reviews--Seduction of the Innocent 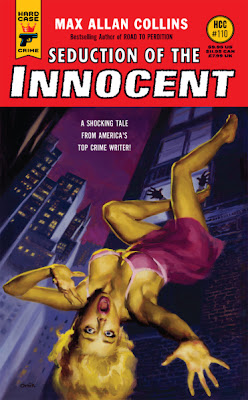 It’s probably been 20 years since I read a novel by Max Allan Collins if for no other reason than that I rarely read much fiction at all any more. I had been looking forward to his newest, however, SEDUCTION OF THE INNOCENT, because of its comic book theme. For those who don’t know, the author himself has a long career in comics and comics journalism. His best-known works in the comics field are probably MS. TREE, a long stint as Chester Gould’s replacement on DICK TRACY and a short but highly touted run writing BATMAN. Far better known are his many hard-boiled and often award-nominated mystery novels.

SEDUCTION OF THE INNOCENT, as any comics fan can surmise from the title, deals with the 1950s crackdown on violence, crime, horror and sex in comics as spearheaded by an overzealous psychiatrist with a manipulative book by that title. In fact, the good doctor has been in the news just recently as it’s been proven that his “facts” were actually not quite as factual as he wanted readers to believe.

The Collins book of that name takes some of the more colorful characters of the day and tells their stories—all pretty accurately, historically speaking, right down to quotes. You meet Dr. Fredric Wertham and his pervy compatriot, Gershom Legman, EC’s  (and MAD’s)William M. Gaines and Al Feldstein, Lev Gleason’s Charles Biro and Bob Wood (creators of CRIME DOES NOT PAY), all under fake but recognizable
names but all giving as accurate a portrait as anyone familiar with comics history will immediately recognize them along with the other various artists and such who appear. That’s my problem with SEDUCTION OF THE INNOCENT. In spite of the altered names and a couple of totally fictional POV characters, seemingly written in a vague homage to Nero Wolfe and his legman Archie, more than half of the book is taken up being so historically accurate that it’s like reading a non-fiction story you’ve read a dozen times before. Or at least it was to me with my background in comics history. Perhaps someone unfamiliar with all the kerfuffle of the Kefauver Hearings and the death of EC might read it all very differently.

That said, we’re more than halfway through the book before there’s a murder in this murder mystery. And yes (Spoiler?), as one might expect, it’s the Wertham stand-in.

That’s when the book really got good for me! Jack Starr is a lightly sketched lead in the traditional hard-boiled mode, a noir-hero a la a youngish Dick Powell. He’s working for his stepmother, an only slightly older Gypsy Rose Lee type who inherited a major syndicate from her late husband, loosely inspired by pulp writer and DC Comics founder Major Malcolm Wheeler-Nicholson. In succession and in the classic tradition, Jack enjoys the favors of sexy broads, punches out the drunken tough guy and gets taken for a ride by the Mob, all leading to an ending that I felt was ever so slightly telegraphed but nonetheless well carried off. 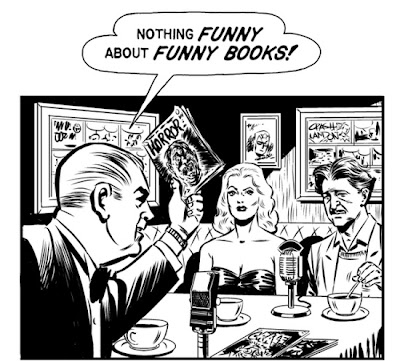 All of this is augmented wonderfully by between chapters EC-style illustrations from Collins’ longtime associate (and my own Facebook pal), Terry Beatty. An art mimic of some renown, Terry’s work has intentional echoes of Johnny Craig, Wally Wood and Jack Kamen. He even turns up with a double page Ellery Queen-type bit just before the concluding chapter, reminding the reader of all the suspects!

After all is said and done, Max Allan Collins offers a comparison between his fictional characters and their real-life counterparts. Interesting but, again, nothing really new to me. In fact there were two of the suspects who I knew couldn’t POSSIBLY have committed the murder because of what I remembered about their real-life stories.

If you’re a knowledgeable comics fan, it’s definitely a fun read. If you aren’t really into comics but just like a good murder mystery, I’m betting it’s even better! SEDUCTION OF THE INNOCENT. Make sure you get the one by Max Allan Collins, NOT the one by Fredric Wertham.
Posted by Booksteve at 12:30 AM