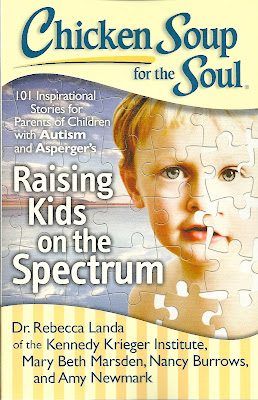 Wife Rene just received her contributor copies of CHICKEN SOUP FOR THE SOUL--RAISING KIDS ON THE SPECTRUM, due out on April 2nd.

As many longtime readers now, son bookdave has Asperger's Syndrome (and refuses to stop self-identifying as such in spite of the new DSM retroactively saying it never existed!). He's lucky in that he has all the positive aspects associated with it and few of the negatives--and none of the major ones.

For this book, though, Rene has written a brief memoir of a particularly precocious incident caused by our son's lifelong deep desire to learn. Let's just say he knew where babies came from when he started kindergarten...except for the part  about the Filipino tubes.

If you or someone you care for is on the spectrum, this book offers, in the time-honored CHICKEN SOUP tradition, more than a hundred uplifting and inspiring true tales of others who have been there and done that. You can order a copy at the link below or check your local bookstore (assuming you still have one near you) in a couple of weeks.

Posted by Booksteve at 2:11 PM