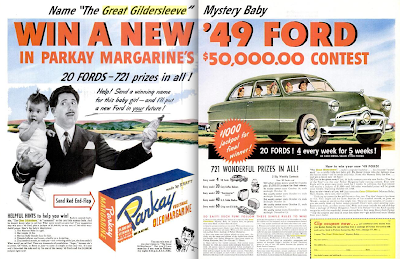 In 1949, Hal Peary's Great Gildersleeve character found a baby on his doorstep and took it in. Here, from LIFE, we see Kraft sponsoring a major contest to name the bay so one can assume the baby was meant to be a permanent addition to the show. And yet, eventually, the child's father turned up and the baby was gone. Why? Was it that the fans wrote in and didn't like it? Did the ratings plummet? Was star Peary not happy with the baby stealing his thunder perhaps?

Whatever the reason, two years later the whole concept was brought back into play, though, this time with Willard Waterman's Great Gildersleeve and a Kraft contest to name niece Marjorie's newborn twins! The fact that it was so similar and so soon afterwards would seem to indicate the problem was NOT listener disapproval. Who knows? One of those questions I should have asked Willard Waterman about when Rene and I met him years ago I guess. 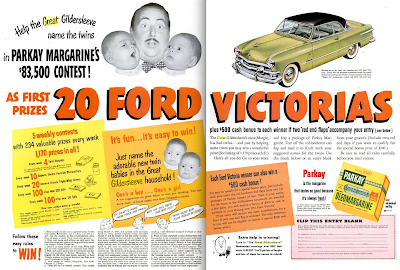