Somewhere in the seventies Charles Schulz began the tradition in PEANUTS. Snoopy, his by then beloved dog with the overactive fantasy life, had imagined himself as a World War I flying ace for years. It stood to reason then that he would be a veteran. In one Veteran's day strip, Snoopy made reference to going over to Bill Mauldin's house to "quaff a few root beers." Teenage me didn't get it. But my Dad did. He explained to me that Mauldin was himself a cartoonist, creator of Willie and Joe, the two everyman soljers who helped him and thousands of others get through World War II. More or less every year after that, Snoopy would start his annual trek for root beer quaffing. 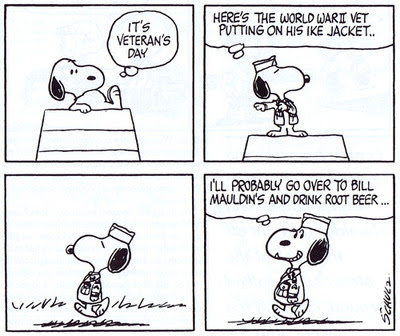 Schulz passed in 2000 and PEANUTS went into reruns. When Mauldin himself passed in 2003, Snoopy got one last chance to quaff a few.

To all our veterans from all our wars and other altercations, thank you, and a root beer toast from Booksteve on tomorrow's Veteran's day.
Posted by Booksteve at 7:03 PM