Movies That Fell Through the Cracks # 74 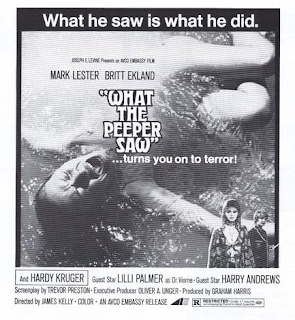 One of the creepiest movies I've ever seen is the little known 1972 horror movie, NIGHT CHILD aka WHAT THE PEEPER SAW. Clearly made on a low budget, this film is essentially an exploitation film made with a prestige cast. Young Mark Lester, still angelic several years past his Oscar-winning OLIVER, is the title character. He's home from boarding school, still reeling from the recent accidental death of his mother, when he meets his new stepmother, played by Britt Ekland, and takes…shall we say an unUSUAL interest in her.

In time he begins to demonstrate inappropriate touching and she discovers a peephole where he's been able to watch her with her husband in bed. She finds reason to question whether he might know more than he's let on about his mother's "accident" as well. In her efforts to get him to tell her what he knows, she allows herself to be blackmailed into stripping in front of him.

He then tells her everything only to have her be the one the psychiatrist goes after. She's locked up for treatment for months. Upon her release, her inappropriate relationship with her stepson takes a truly bizarre turn leading toward a genuinely shocking ending! 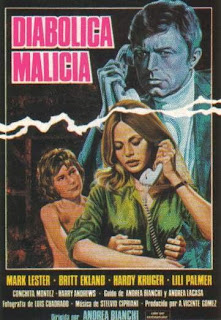 With its vague incest undertones and some surprisingly explicit scenes involving the young teenage boy and his naked stepmother (at least one of which appears to be a double for him but another clearly not), one feels a bit dirty even watching it. The matter of fact violence, although there isn't really that much, adds another layer of "Ewww" to the psychological horror that builds throughout.

Lester's performance is appropriately emotionless. The biggest problem with the picture is that everyone else's performances are also emotionless when they shouldn't be. Hardy Kruger as the husband/father is just "there." Lilli Palmer, classy as always as the doctor, shows the most life but not much. Oddly, the film's weakest point is Ekland. Gorgeous and normally not a bad actress, here she seems not only walking through the role but having trouble with the English language, even mispronouncing a couple of words. This was around the time of her biggest fame with her appearance as a Bond girl and her memorable performance in THE WICKER MAN and yet…

Still, as emotionless as everyone is, it's the emotions the narrative stirs up that carry this film along to its nightmarish stop. And that's what it is. More a stop than an ending. A stop that leaves the viewer spinning with conflict and needing a quick shower. Beware of cut versions.
Posted by Booksteve at 12:30 AM