Booksteve Reviews-Twitch Upon A Star by Herbie J Pilato 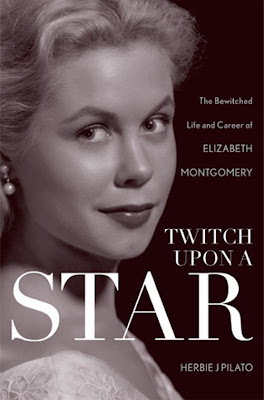 I remember very distinctly being in love with Elizabeth Montgomery by the time I was in second grade. That would have been 1967. I had a friend in my class that year who had a new baby sister and his parents had named her Samantha. BEWITCHED was big everywhere that year.

TWITCH UPON A STAR is the new in-depth biography written by Herbie Pilato. Herbie, too, has loved Elizabeth Montgomery and Samantha all these years. Some time back, that led to his publication of THE BEWITCHED BOOK. Speaking as someone who literally has a bookcase full of books about television series, I will state flat out that THE BEWITCHED BOOK is one of my favorites.

But Herbie wanted to find out even more about Liz--Lizzie as she was called in later years. Out of that desire comes this biography.

If TWITCH does anything, it serves to downplay the magic and humanize its subject. Throughout her public life and career, Lizzie had always somehow managed to remain above the Hollywood fray, maintaining a mystique of absolute beauty, talent and intelligence without a huge amount of gossip. For the most part, she was allowed to keep her private life private.

Starting from a position of unabashed love for his subject, Herbie nonetheless notes in his introduction that he doesn't want to write a whitewashed puff piece. He had himself interviewed the actress for his other book and thus took those talks as a starting point to find the real woman behind the carefully preserved image. To an extent, he succeeds.

Lizzie, for instance, had daddy issues. Big time. Her father was ultra-conservative actor Robert Montgomery (HERE COMES MISTER JORDAN) who, while supportive of his daughter in her early acting career, became increasingly estranged with her over the liberal politics she developed on her own. To her credit, she never spoke ill of him in public but sadly she pretty much stopped speaking TO him as well.

Her fist few husbands were, to one extent or another, dictated by the problems with her father as she sought a surrogate. This was particularly true with actor Gig Young, much older than she and with, amongst other domestic issues, a major drinking problem. While Young's demons would haunt him through a tragic end some years later, Lizzie was able to escape into the arms of Producer William Asher who would become more the nurturing father figure she felt she needed. While the relationship with Asher is dissected in great detail, I would have liked to have seen more about the complexities of her marriage to Young and even her brief first marriage.

Seeing as how it was such a major part of her life, BEWITCHED is covered pretty thoroughly yet again, with the author wisely looking at it this time from a behind the scenes perspective, sharing anecdotes and quotes from and about the many strong personalities who worked on that show. The whole run of the series is paralleled with the Asher/Montgomery marriage and we see it reach great heights before settling into a more blasé existence as that relationship began to crumble. 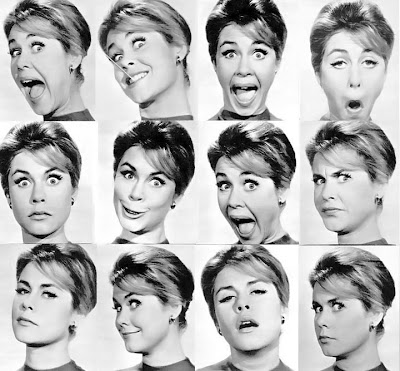 It's revealed that Liz had an affair with someone who worked behind the scenes on BEWITCHED. With her "perfect" image so ingrained, it was hard for me as a reader to fault her for this. Speculation--and he makes a pretty good, if circumstantial, case for it--of a hushed up drinking problem doesn't much diminish her glow either.

From BEWITCHED, the story bounces right on through her post-sitcom TV career from PASSWORD and MRS. SUNDANCE to the important drama, A CASE OF RAPE and Lizzie's memorable turn as another Lizzie, Lizzie Borden.

We see also her support of gay rights, particularly in support of the forcibly outed second Darren, Dick Sargent. Although closeted, a number of BEWITCHED cast members are now known to have been gay.

She met actor Robert Foxworth while making the TV movie, MRS. SUNDANCE and he broke the father figure/daughter cycle of her relationships. They made a good team and by all accounts were very happy together until her unfortunate passing at much too young an age.

Much of Herbie's narrative comes from published and unpublished interviews with Montgomery herself as well as various friends and fellow performers. Although a lot of interviews with celebs back in the day are spurious, his years as a show biz insider seem to enable him to pick out more grains of truth than not as he pieces together not quite the whole puzzle, but enough to let us see Elizabeth Montgomery in a whole new light. In fact, it's like meeting her all over again for the very first time. I'm a long way from second grade at this point...but after reading TWITCH UPON A STAR, I still love Lizzie!

If you've ever enjoyed an episode of BEWITCHED, come meet her for yourself.
Posted by Booksteve at 5:03 AM