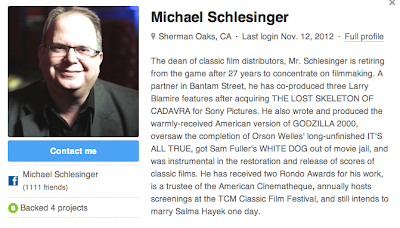 Back in the early eighties, Michael Schlesinger co-hosted (with Larry Thomas and C. Fred Baum) a local Cincinnati TV movie show on weekends, was co-owner of the best repertory theater Cincinnati has ever had (also with Larry Thomas) and also co-hosted (with Dave Dugle) a fast-paced call-in trivia show on the radio. I prided myself on knowing a lot about movies. Michael knew more.

In 1981, I was flattered when SCREEN TEST, a movie and TV game show on Cincinnati-based QUBE network, sought me out by reputation as someone who would be a good opponent for Michael Schlesinger on their show.

I lost. Luckily, Michael left town that same week to seek fame and fortune in Hollywood and I got to continue on the show.

Michael's adventures in Hollywood deserve an article all their own. Today, though, I'm here to bring to your attention his current Kickstarter campaign.

Michael, as I have said, knows movies. He has an amazing ear for detail and a great love of the classics--the good ones and the bad ones. His goal here is to create what he calls a "calling card" to show what he can do to potential future investors on bigger projects. As you can imagine, then, he's pulling out all the stops here to make the best possible comedy short subject in the Old Hollywood tradition. Did I mention that--bar none--Michael is also the single funniest individual I've ever known? This is a man who once wanted to cast Steve Martin in a GODZILLA flick as a reporter named Raymond Burr. If you know your Big G history, that is one of the most hilarious concepts EVER! 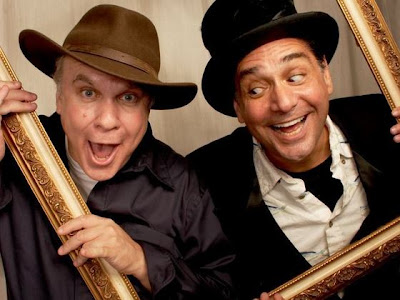 Anyway, click the link below to read all the details of exactly what he's up to and then, if you're of a mind, slip him a few bucks. In spite of all of our ongoing financial issues, I managed to pledge ten dollars. If I can do it, you can.
http://www.kickstarter.com/projects/1479434141/its-a-frame-up