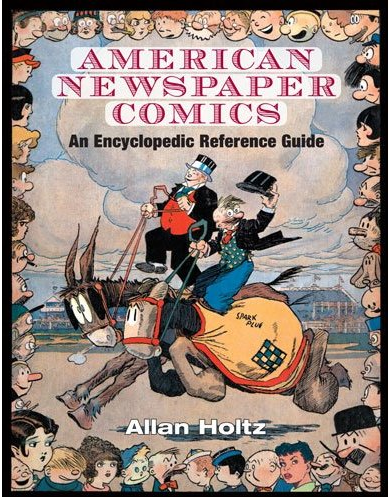 As you all know, I was a charter member of Craig Yoe's  I.T.C.H.--the International Team of Comics Historians. As said comics historian, I was recently offered a review copy of the new book, AMERICAN NEWSPAPER COMICS-AN ENCYCLOPEDIC REFERENCE GUIDE by Allan Holtz.

If you're a strip fan you've probably at some point stumbled on Allan's great STRIPPER'S GUIDE blog, one that I've plugged more than once at I.T.C.H. In it, he covers everything from the classics to the obscure with the emphasis on the latter.

AMERICAN NEWSPAPER COMICS is a definite off-shoot of the research Allan has done over the years and offers just exactly what it says--an encyclopedic reference guide to every US newspaper strip he could find any reference to whatsoever.

Most general newspaper strip histories touch only on the classics. In fact, until now the most comprehensive book to go into more detail and cover the lesser-known works as well was Maurice Horn's WORLD ENCYCLOPEDIA OF COMICS. It's a thick, lovely volume from the late seventies that nonetheless has enough errors that the late Don Thompson once wrote a weekly column for the better part of a year in THE COMICS BUYERS GUIDE (or perhaps it was TBG) correcting the ones that he personally noticed! That said, it was the best that was out there.

I can't vouch for 100% accuracy on this new book. In fact, any undertaking of this size is bound to have its share of errors. (The only one I spotted was a double word in one place.) I can, however, vouch for the author's reputation as a stickler for detail. In its more than 600 pages, the bulk is taken up by an alphabetical strip listing offering info on dates, syndicates, papers and creators. There's also a long and fascinating section on syndicates--how they work and their history.

There's a creator index, a cross-reference section for titles and an incredible bibliography of collections of various strips.

The book would be twice as thick and twice as expensive (and it isn't cheap!) if there were illustrations so someone decided to avoid those issues by putting all of the illustrations that WOULD have been in the book on a bound-in CD-Rom. 3100 of them to be exact! As Allan's introduction points out, we all know BEETLE BAILEY and BLONDIE well enough and have seen plenty of examples so the CD concentrates on more obscure goodies going back more than a hundred years. To the buff, like myself, these are all priceless images. Here's a public link to a Facebook gallery where I've posted dozens of them. There are literally thousands more to savor on the CD!

AMERICAN NEWSPAPER COMICS is not the kind of book you sit back in your easy chair to read. It's the  kind of book you refer to as needed...and if you're at all like me, the subjects of who did what strip when and what was this called and where did this appear all come up almost astonishingly often in real life! But then that may be just me. Casual strip fans might wish to pass because of the price but for historians, writers, editors, publishers and particularly libraries, Allan Holtz's AMERICAN NEWSPAPER COMICS-AN ENCYCLOPEDIC REFERENCE GUIDE will undoubtedly be THE indispensable reference on its subject for many years to come. Get your copies now!
Posted by Booksteve at 9:08 PM